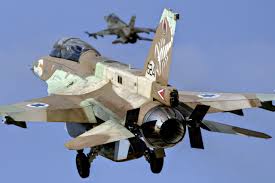 Israel is not in a pleasant situation. Every day, her arch enemy Iran draws closer to refining enough uranium to build 100s of nuclear weapons.

Every day the Iranian program becomes more difficult to dislodge – as the uranium is concentrated, the number of centrifuges required to complete the process decreases, allowing the remaining refining operation to be moved to smaller and more covert facilities.

America, ostensibly Israel’s ally, is rumoured to have ordered US warships to shoot down Israeli aircraft, should a strike on Iran appear to be in progress. According to Israeli newspapers, President Obama thwarted a planned 2014 Israeli attack against Iranian nuclear facilities, by threatening to shoot down the Israeli bombers.

America is currently sending additional warships to the Persian Gulf – ostensibly to blockade Iranian supply runs to rebels in Yemen, but if rumours of President Obama’s threat against Israel are correct, perhaps also to reinforce US firepower, should Israel decide to mount an attack against Iran.

There is no doubt an attack is on the drawing board – the Israeli Defence Force admitted they are training for an attack on Iran, in a recent interview with The Times of Israel.

Iran may pose a grave existential threat to Israel – at least Israel believes they do and they appear to have good reasons for their concerns. According to an Israeli report written in 2008, Iran regularly state that Israel will shortly be wiped from the face of the Earth.

Regardless of whether the Iranian threats are as bad as is claimed, or whether Iran actually means what they say, the Iranian nuclear programme will provide Iran with the means to fulfill this terrifying threat.

Iran is currently purchasing an advanced Russian air defence system – which will further complicate the job of attacking Iran, should Israel choose to mount an attack.

If Israel does decide to mount an attack against Iran, they will run a gauntlet – they will have to fly long distances, over hostile Syria, and other unfriendly countries. They will potentially face a massive counterattack from the growing American presence in the Persian Gulf. When they finally reach Iran, they will suffer even more casualties from the advanced Russian anti-aircraft systems, which will shortly be operational.

And when a handful of Israeli aircraft finally reach their targets, the surviving Israeli warplanes will have to somehow inflict sufficient damage on heavily armoured nuclear facilities, some of which are buried hundreds of feet underground, to prevent them from being repaired.

There is only one kind of bomb in Israel’s arsenal, which can fulfill this military requirement.

A weak Iran deal, if it is ratified, will in my opinion be a lot more than a diplomatic failure – for the reasons I have provided, I believe it may trigger a nuclear war.