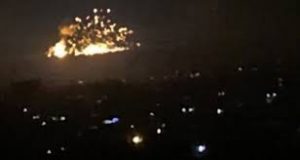 Syrian state television said Wednesday evening the country’s air defenses responded to “Israeli aggression” in what appears to be an attack on Hezbollah targets in the area, like reported by ynetnews.com.

The alleged attack came hours after Lebanon’s terror group said it had fired an anti-aircraft missile at an IDF drone in Lebanese territory. Israeli military confirmed the missile fire but said the drone was not hit and continued its operation in the country.

The Syrian news agency Sana said the attack took place in Quneitra province in southern Syria close to the Golan Heights, with echoes of explosions heard in the area.

Earlier on Wednesday, two Iranian cargo planes affiliated with the Iranian Air Force and the Revolutionary Guard, landed in Damascus and a few hours later returned to Tehran. In addition, a Syrian Air Force cargo plane made its way from Tehran to Latakia.

About two and a half weeks ago, Syria reported that Israel carried out an attack near the city of Hama in the west of the country.

According to reports, a barrage of missiles was fired from the direction of the city of Tripoli in Lebanon and explosions were heard in the area near the city.

A Syrian military source claimed that most of the missiles were intercepted, but parents and their two children were killed in the attack, while four others were wounded.