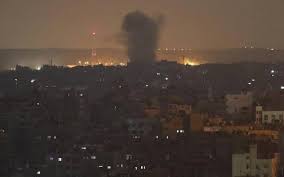 Israel carried out retaliatory strikes on Hamas targets in the Gaza Strip overnight Tuesday following a spate of arson attacks on Israeli communities in the western Negev, like reported by jns.org.

On Tuesday, incendiary balloons launched from Gaza caused some 60 separate fires in western Negev communities. Firefighters and JNF personnel, as well as Israel Nature and Parks Authority (INPA) workers and volunteers, battled to keep the destruction to a minimum.

The IDF Spokesperson’s Unit reported that fighter jets, helicopters and tanks had attacked a number of Hamas targets in Gaza.

“The IDF views any terrorist activity aimed at Israel seriously and will continue to do whatever is necessary in the face of attempts to harm the citizens of Israel,” the spokesperson said in a statement.

“The Hamas terrorist organization is responsible for what happens in Gaza and what comes out of it, and will bear the ramifications for terrorist acts against Israelis,” the statement continued.

The head of the Eshkol Regional Council, Gadi Yarkoni, said on Tuesday in response to the wave of arson attacks from Gaza that “we are deep into an escalation of arson balloon attacks that are burning our fields.”

Yarkoni said that without the quick response of the IDF, firefighters and volunteers, the fires would have caused much worse damage.

“Thanks to the wonderful, devoted security people in the council’s security branch, who work with the IDF and the Fire and Rescue Services, the INPA, and the JNF, we are luckily managing to get a handle on the fires quickly and prevent them from spreading and causing agricultural damage,” said Yarkoni.

The solution to the security tensions between Israel and Gaza must come from the leadership, he added.

“The repeated escalations are the result of an ongoing impasse in peace talks with Gaza, and the residents of the western Negev are the first ones to pay the price. Just like I get up every morning and remind myself that before anything else, I am here to serve my residents, I expect the Cabinet ministers to remember their obligation to the security of the citizens who live near the border,” said Yarkoni.

Following a tour of the Hatzorim Airbase earlier in the day, Israeli Prime Minister Benjamin Netanyahu said Israel viewed the wave of attacks from Gaza “with utmost gravity,” according to a statement from his office.

“You will see the results of this very quickly,” said Netanyahu, adding, “It is more important that Hamas and Islamic Jihad see the harsh implications of this ordeal. It will have harsh results and a very heavy price.”

The Israeli premier emphasized that the warning applied to all Iranian proxy forces, in Gaza and beyond.

“I would like to make it clear to all of Iran’s proxies, including in Gaza: Balloon terrorism will have a heavy price. We will not tolerate this. We will take action and exact a heavy price. They should remember that we have done this in the past, because we will do it now as well,” said Netanyahu.

Hamas spokesman Fawzi Barhoum on Tuesday commented on the closure of the Kerem Shalom border crossing into Gaza as a result of the escalation along the border, calling the decision “an aggressive step, for which Israel will pay.”