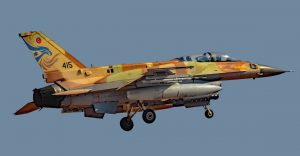 Israeli warplanes hit Hamas targets in the Gaza Strip early on Thursday in response to rocket fire from the territory into southern Israel, the army said according to thedefensepost.com.

The fighter jets targeted a military compound in the northern Gaza Strip and a training facility and a munitions manufacturing and storage site in the south, the Israel Defense Forces said in a statement on Thursday, October 25.

Gaza’s rulers Hamas said there were no casualties in the strikes.

An Israeli army spokesperson said the raids were in response to a rocket fired from Gaza which caused no casualties or damage but which evaded Israel’s Iron Dome defence system, triggering an inquiry.

It was the first such fire from Gaza since October 17 when a rocket severely damaged a family home in the southern Israeli city of Beersheba, prompting some 20 retaliatory air strikes and the temporary suspension of fuel deliveries to Gaza.

Hamas and its allies disavowed the recent rocket fire, blaming fringe groups bent on sabotaging United Nations and Egyptian efforts to broker a long-term truce in return for a relaxation of Israel’s crippling 11-year blockade of the impoverished territory.

But Israel has vowed repeatedly to hold Hamas to blame for any rocket fire regardless of who launched it.

“The Hamas terror organization is responsible for all events transpiring in the Gaza Strip and emanating from it,” the IDF said on Thursday.

The latest flare-up comes after months of Palestinian protests along the Gaza border that have drawn a deadly response from Israeli troops.

The protesters have been demanding an end to Israel’s blockade and the right of return to land now inside Israel, from which their families were expelled or fled during the 1948 war that accompanied its creation.

The air force on Wednesday struck a position in Gaza used by protesters to launch incendiary balloons into Israel, the IDF said.

Palestinian fire kites and balloons have destroyed large areas of Israeli farmland causing hundreds of thousands of dollars worth of crop losses.