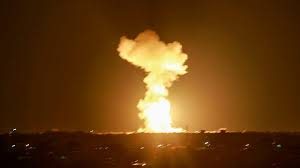 Israel struck some 15 Hamas targets in the northern and central Gaza Strip overnight Tuesday in response to rockets that were fired from the coastal enclave earlier that night, the Israeli military said according to haaretz.com.

The sites targeted in the airstrike include Hamas military infrastructure used for weapons manufacturing, several targets in a military compound of Hamas’ naval force and a an attack tunnel intended to be used for terror attacks, the Israeli army said in a statement.

The Israeli army noted that its strikes were carried out in retaliation for two rockets that were launched from the Strip toward the southern Israeli cities of Ashkelon and Ashdod on Tuesday. The rockets were fired while Prime Minister Benjamin Netanyahu was addressing crowds at a campaign rally in Ashdod, and had to be taken off the stage mid-speech.

Prior to the Israeli strike in Gaza, Netanyahu held security consultations with senior defense establishment officials.

This is the latest escalation in developing tensions on Israel’s border with both Gaza and Lebanon, as the country enters the final week of its redux election campaign.

Palestinian sources said Tuesday night that Israel had carried out several airstrikes near the city of Deir al Balah in central Gaza, in addition to striking in the northern Strip.

Hamas’ military wing reported that an Israeli drone had been downed in the night between Monday and Tuesday in the coastal enclave. The movement had managed to access information regarding the unmanned aircraft mission, Hamas said. The IDF later confirmed the drone had fallen in Gaza.

On Sunday, a projectile was fired from Gaza but failed to reach Israel, landing inside the Strip. This came one day after the IDF said it carried out several airstrikes in Gaza, including on a Hamas naval base and two complexes of the organization’s aerial command.

According to the IDF, the strikes were in response to a drone attack earlier on Saturday, in which a Gaza drone entered Israeli airspace and dropped explosives on a military vehicle by the border fence.

A few hours earlier on Saturday, an Israeli military aircraft fired at what it identified as the Gaza cell that launched the drone attack.

On Friday night, Israel struck several Hamas targets in Gaza after five rockets were launched from the Strip overnight Friday, targeting Hamas military positions near the Israeli border with aircraft and tank fire. The fire was an apparent response to the death of two Palestinian teenagers killed by Israeli fire during weekly March of Return border protests.

There have also been continuing tensions between Hezbollah and Israel along the Israel-Lebanon border, after an Israeli drone attack on a Hezbollah site in a Beirut suburb – although both sides have until now managed to prevent an escalation.