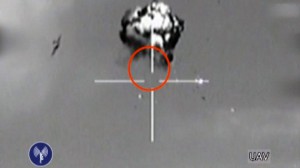 An Israeli military spokeswoman declined to comment when asked about the explosion.

A Lebanese security source told Reuters that the cause of the blast, which occurred in a mountainous area near the town of Saghbein, “is still not 100 percent clear but most probably it was an Israeli air strike to destroy their drone.”

It was not clear if there were casualties.

Last year, Israel remotely detonated a spying device that was planted near a main road in south Lebanon after it was discovered by its long-time foe Hezbollah. That blast killed a Hezbollah member, and the group responded by detonating a bomb on Lebanon’s border with Israel, wounding two Israeli soldiers.

Israel has carried out several air strikes in neighbouring Syria since the start of the four-year civil war there, mostly destroying weaponry that Israeli officials said were destined for Hezbollah.

Hezbollah and Israel fought a 34-day war in 2006 in which hundreds of people were killed.

Earlier this year an Israeli helicopter strike in Syria killed several Hezbollah members and an Iranian general. The group hit back days later with a rocket attack that killed two Israeli soldiers on the frontier with Lebanon.

Observers and Lebanese residents have sometimes seen surveillance planes over Lebanon before such strikes.