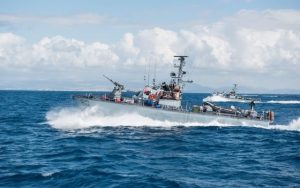 Security forces arrested a member of the Palestinian Islamic Jihad terror group off the Gaza coast suspected of planning to sink an Israeli naval patrol boat and kidnap any survivors last month, Israel revealed according to toi.com.

The plan was to use three boats to lure in a navy ship, fire a missile at it and then seize the wounded and slain soldiers, according to a joint statement by the Shin Bet security service and Israel Defense Forces.

This plot was foiled on the night of March 12, when the navy’s 916th Patrol Squadron stopped a Palestinian boat that had left the designated Gaza fishing zone.

A video of the nighttime arrest shows well-armed naval special forces boarding the fishing boat and calling for the 10 people on board to put their hands up and get down. The boat was impounded in the Ashdod port.

The crew was brought into Israeli custody for questioning, including Amin Saadi Muhammad Jumma’a, 24, a member of the Palestinian Islamic Jihad who told interrogators that he had received instructions from his commanders to prepare to carry out the attack on Israeli Navy ships, according to the Shin Bet and IDF.

The planned attack was meant to be a continuation of the Palestinian Islamic Jihad’s vendetta against the IDF for the demolition of the group’s tunnel on October 30, in which several of its members were killed.

Two of the others on board are also suspected of having been part of the plot. The other seven were released after their interrogation, the Shin Bet said.

Jumma’a, a resident of the southern Gaza city of Rafah, told interrogators that the plan was for one boat to act as a diversion by leaving the fishing zone so that a navy ship would approach it.

“A second boat would attack the ship, firing a Kornet (anti-tank) missile at it, with the intention of causing injury and death to the soldiers on board,” the statement said

A third boat would then arrive on the scene and take the wounded soldiers hostage and steal the bodies of those killed, the security forces said.

“In order to prepare for the attack, Jumma’a conducted a number of observation missions on navy ships and collected intelligence about the location of the navy ships, the number of soldiers on them and the types of weaponry on board,” the statement said.

Jumma’a and the two other suspects were slated to be indicted in a Beersheba court on Wednesday.

Prime Minister Benjamin Netanyahu and Defense Minister Avigdor Liberman hailed the joint IDF-Shin Bet operation. “The complexities of the Gaza border are varied and complicated. [But] the nation of Israel has someone it can count on,” Liberman wrote on Twitter.

Netanyahu said the plot showed “true intentions of the terror groups in Gaza, who are trying to camouflage their murderous plans by organizing provocations along the security fence.”

On Friday, over 30,000 Palestinians demonstrated along the Gaza border, in what Israel describes as a riot orchestrated by the Hamas terrorist group, which rules Gaza, and what Palestinians say was supposed to be a peaceful protest.

There were discrepancies in Palestinian reports on the Gaza death toll from Friday. While Hamas claimed Monday that 18 had died, the official news agency of the Palestinian Authority had the number at 16. Israel has no official death toll figures. Over 1,000 were reported injured.

The Shin Bet and IDF accused the Iran-backed Islamic Jihad of taking advantage of the “civilian comforts” granted by Israel to the residents of Gaza, specifically fishing rights, in order to “advance terror attacks.”

In addition to the planned naval attack, the Palestinian Islamic Jihad has already carried out at least two other acts of revenge on Israel for destroying its tunnel on October 30.

One month later, the group fired a barrage of mortar shells at an army position northeast of the Gaza Strip, causing damage but no injury. In December, the group also fired mortar shells at southern Israel in order to disrupt an event honoring an IDF soldier who was killed in the 2014 Gaza war and whose remains are currently being held by the Hamas terrorist group.