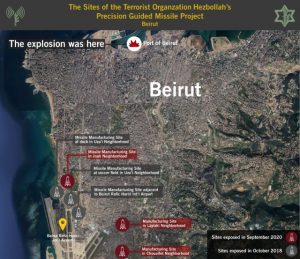 Israeli Prime Minister Benjamin Netanyahu revealed on September 29, in an address broadcast to the U.N. General Assembly, the locations of Hezbollah’s production and storage facilities for missiles adjacent to a gas-storage site and civilian residences in the Janh neighborhood of Beirut, like reported by jns.org.

Netanyahu accused Hezbollah of endangering the civilian population. He tied the massive August explosion in the Beirut Port to Hezbollah weapons depots stored in the port.

In a statement released after Netanyahu’s speech, the Israel Defense Force’s spokesperson revealed the underground facilities for the production of precision missiles in two other neighborhoods in western Beirut, Laylaki and Chouaifet, located beneath residential buildings and located near a mosque, church and medical center.

Hezbollah chief Hassan Nasrallah denied Netanyahu’s remarks and invited media representatives in Lebanon to visit and check the sites revealed by Netanyahu to see if they contained missiles. Hezbollah made an immediate explanatory P.R. effort to show that there were no missiles at the site, but in the reporters’ videos, Israeli intelligence identified “a laser cutting machine, a hydraulic cutting machine, a metal rolling machine and a press for bending metal”—all equipment that can produce components for precision-guided missiles. The army said that the cutters could be used to create “warheads” and “stabilization fins.”

A reporter from the Beirut-based Al Mayadeen satellite news channel was permitted into part of a closed area at the site and photographed an advanced hydraulic CNC machine from Turkey, used for cutting and shaping metal tubes.

Despite Israel’s exposé, Hezbollah denied that it manufactures and stores missiles in civilian residential areas, and expressed satisfaction with Nasrallah’s course of public relations. Sources close to Nasrallah claim that “Netanyahu lost the P.R. battle within hours, and he didn’t think for a moment that would happen.”

They continued: “Netanyahu fell victim to his traditional showmanship, and it was a professional error of strategic dimensions. … He propagated false information to incite against Hezbollah at the U.N.”

In an interview, Nasrallah charged, “Netanyahu was inciting the Lebanese people against Hezbollah, as usual.”

It appears that despite Nasrallah’s “blitz” of media denials, Hezbollah continues to manufacture and stockpile missiles and rockets inside civilian areas that serve as human shields. This is how things are in the densely populated neighborhoods of Beirut, the villages and towns of southern Lebanon and the Baalbek region.