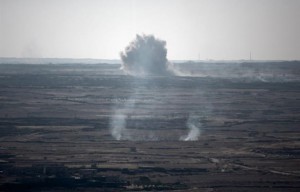 Conflicting reports have emerged over a purported Israeli strike in Syria’s Quneitra, with Hezbollah’s Al-Manar saying the raid targeted pro-regime militiamen while opposition outlets purported that Hezbollah commanders had been killed.

Hezbollah’s Al-Manar television reported early Wednesday afternoon that Israel conducted an air trike outside a Druze-populated town located on the foothills of Mount Hermon near the Israeli border.

“Two members of the National Defense Force were martyred after their car was targeted by an Israeli [drone] at the entrance of the town of Hadar in the Quneitra countryside,” the station said, without elaborating further.

Meanwhile, the pro-rebel Smart News reported a similar version of the incident, but specified that “three commanders from Lebanese Hezbollah” had been killed.

The strategic town of Hadar has been targeted by Syrian rebels that on June 16 launched an offensive in Quneitra in a bid to roll back regime forces in the northern part of the province, which borders Israel.

Druze residents of the border town have thrown their support behind the Syrian regime and have voiced fears over Islamists entering the area, especially after the Al-Nusra Front in early June gunned down dozens of Druze villagers in the northern Idlib province.

Hadar residents have also been linked to Hezbollah-guided anti-Israel operations in the Golan. On April 25, two young men from the Druze town were killed by an Israeli airstrike when they allegedly approached Israel’s border fence in the Golan with an explosive device.

A number of analysts speculated that the Golan incident was a reprisal for the Israeli raid, noting that on March 5, 2014 IDF troops near the same spot as Sunday’s incident opened fire on approaching Hezbollah militants a week after Israel conducted a raid along the Lebanese-Syrian border.

Ten days later Hezbollah responded to the raid with an attack on an Israeli border patrol near the Shebaa farms, killing two Israel Defense Forces troops.