You are here: Home / Mediterranean / Israel raises estimate of Hezbollah’s rocket arsenal to 150,000 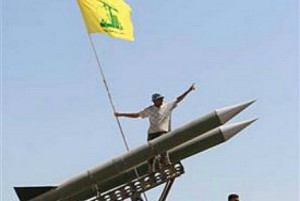 Israeli officials have raised their estimate of Hezbollah’s rocket arsenal to 150,000, an increase of 50% from May of this year, Avi Issacharoff reported for The Times of Israel on Thursday.

The revised valuation on rockets suggests Hezbollah is ramping up efforts to acquire weapons whose purpose is to attack Israel, despite its deep involvement in the Syrian civil war.

Hezbollah forces have been operating in Syrian territory for over three and a half years. Thousands of the organization’s fighters are thought to be on Syrian soil and hundreds, some say thousands, have been killed there, including at least one senior officer.

The organization has simultaneously continued to amass short- and medium-range rockets from Syria while also increasing its cache of Iranian-made long-range missiles.

Issacharoff added that Hezbollah assembled a fleet of drones that can be used for intelligence gathering and combat. The Iranian-backed terror group has also been looking to acquire “SA-17 and SA-22 ground-to-air missiles as well as P-800 Oniks air-to-sea missiles.” Despite the concern over Hezbollah’s improved capabilities, Issacharoff wrote that the terror group is reportedly “not interested in a confrontation” at this time.

Israel has threatened to destroy any game-changing weapons sent to Hezbollah. Reported explosions at Damascus airport on Wednesday were thought to have been the result of Israeli air strikes, though no evidence exists to attribute the explosions to the Israeli Air Force.

An Israeli defense official told The New York Times in May that the buildup of Hezbollah’s terror infrastructure in southern Lebanese villages meant that “civilians are living in a military compound,” and that their lives were at risk. A few days later, a newspaper linked to Hezbollah confirmed the Israeli assessment.

In a conversation with Sheikh Hassan Nasrallah this past August, Iran’s foreign minister Mohammad Javad Zarif said that “the nuclear agreement between Tehran and the world powers created a historic opportunity to [sic] for regional cooperation to fight extremism and face threats posed by the Zionist entity.” A month later, it was reported that Iran had boosted its funding of Hezbollah and Hamas in anticipation of the billions it would receive due to sanctions relief.

In Don’t Be Fooled, Hezbollah is Bigger and Badder Than Ever, which was published in the March 2014 issue of The Tower Magazine, Shai Oseran and Stéphane Cohen wrote:

One should not be surprised, then, to hear commentators asserting that Hezbollah has been severely weakened by the events of the last year. But has it?

Many Israeli military strategists don’t think so. To the contrary, they point to a number of alarming indicators suggesting that Hezbollah may be stronger than it has ever been. And that has them worried. The massive arsenal of advanced weaponry Hezbollah has amassed since it last faced off with Israel in the 2006 Second Lebanon War, the technological advances it has made, and the battlefield experience it has gained in Syria, have all helped turn Hezbollah into what could be Israel’s most dangerous enemy in a generation.