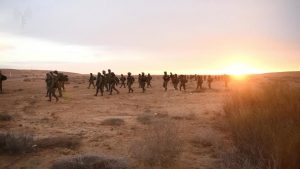 A new brigade in Israel’s southern front has been established to guard the border with Egypt’s Sinai Peninsula, the IDF Spokesperson announced according to jpost.com.

The Paran Brigade will incorporate the IDF’s co-ed Caracal and Bardalas battalions and will be commanded by Col.Eli Yitzhak Ben Bashat.

“It’s establishment is part of the process of integrating the border defense battalions into routine security missions, in a way that provides a qualitative response to missions,” the IDF said  in a statement, explaining that the brigade will be deployed to protect territory extending from Nitsana to the city of Eilat, where troops will train and operate as needed.

“The goal is to continue to protect the border while building the force of the border defense battalions that until now were split,” the IDF said, adding that the new brigade was established following the organizational changes in the IDF’s 80th “Edom” Division and in accordance with the renewed defense concept in the sector.

According to the military the process of establishing the battalion was completed this past week, with the battalions and the brigade trained on dealing with various threats in the sector. The ceremony for the brigade’s establishment was held in the presence of the head of the Southern Command, Maj.-Gen. Hertzi Halevi on Wednesday.

“This unites the entire force structure under one brigade commander. Caracal and Bardelas,” a senior officer in the Southern Command told reporters on Wednesday, adding that “it is intended to strengthen the capabilities and pride of the unit.”

“As a regional and regular division, we will advance processes that will strengthen the operational capabilities of the battalions and will nurture the best resource the brigade has to offer – the people,”Col. Ben Bashat said. “I am confident that with the human strength at our disposal, experience and motivation we will continue to defend the borders of the State of Israel to the best possible. ”

Israel has a 240-kilometer border with the Sinai and Cairo and Jerusalem have been reported to have been closely cooperating in the Sinai peninsula in the fight against ISIS militants since Egyptian President Abdel Fatah al-Sisi rose to power.

Sisi has waged extensive military operations against ISIS in the Sinai, and while the terror group has lost much of its strength, the group remains active and despite the small size continue to carry out deadly attacks on Egyptian security forces.

Drug smuggling from the Sinai Peninsula into Israel is also a major concern for IDF troops who are stationed along the border.

On Saturday a Egyptian policeman accidentally fired towards a military vehicle patrolling along the border, the senior officer in the southern command said, explaining that it is believed the officer shot towards the vehicle because of “heightened operational tension” that Egyptian policemen are facing in their fight against drug smugglers and terrorists in the restive peninsula.

“We are two armies and our countries have a peace agreement with a security attaché, and both armies are obligated to maintain it, ” the senior officer said, explaining that the Egyptian army is thoroughly investigating the unusual incident.