You are here: Home / MidEastGulf / Israel: ISIL demands to be heard 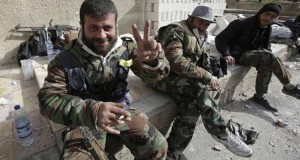 While Hezbollah still talks about attacking Israel the reality is that Hezbollah will remain tied down in Syria and fighting ISIL (Islamic State in Iraq and the Levant) and other Sunni Islamic terror groups on the border for some time to come. Hezbollah leaders quietly admit this is necessary because as much as most Lebanese hate everyone involved in the Syria civil war (especially the Assads) they give Hezbollah credit for fighting to keep Islamic terrorist rebels from moving into Lebanon. There is growing opposition (to the Syrian operations) within Hezbollah and Hezbollah admits that it has arrested a growing number of its own armed men for refusing to fight in Syria.

Since 2013 Hezbollah has suffered several thousand casualties in Syria and that has caused declining morale among the armed members of Hezbollah (mostly part-time militia who are paid for their part-time or full-time participation). While Hezbollah tells its followers that the new Iran treaty that will lift economic sanctions and mean more aid for Hezbollah this is not expected to change much. More money is not going to make Hezbollah more palatable to most Lebanese. Hezbollah leaders don’t discuss that openly.

Things are not doing much better with the other Iranian ally down south. In July Israel managed to arrest a Hamas employee (trying to legally enter Israel for dental care) involved in rebuilding the Hamas military tunnel system. A tip from an informant inside Gaza alerted Israel to the name and true occupation of the man who was going to try and enter for medical care. Facing prosecution for Islamic terrorism, and apparently in pain from the dental problem, the man switched sides and told the Israelis everything he knew. The guy knew a lot as he was one of the hundreds of Gazans hired to work on the tunnels. He and his fellow tunnel employees would gossip among themselves about what they saw and they saw where the new tunnels were going, where the construction materials were coming from (items imported to rebuild housing and civilian infrastructure) and the extent to which Iran was supporting the effort with smuggled in cash, electronics and weapons.

There are apparently some Iranian technical advisors in Gaza as well. Hamas is definitely planning for another war and is still storing weapons, rockets and bombs inside residences. Israeli military officials said that these revelations, in general, were not new but some of the details were. The Israeli generals said they were prepared. The testimony of a Hamas employee would help support foreign aid groups in Gaza complaining about Hamas diverting aid to military purposes. Many of these groups have left Gaza over the issue, or been forced out by Hamas. This has meant less aid for Gaza, which Hamas attributes to an Israeli plot and a Western war on Islam not anything Hamas has done.