You are here: Home / MidEastGulf / “Israel is working to prevent Iran from acquiring nuclear weapons” 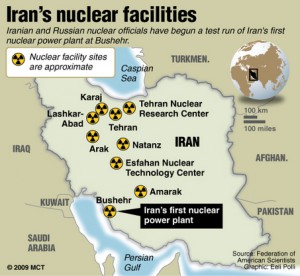 “The technology to create a nuclear facility in Iran has existed for many years. If the Iranians haven’t managed to get there, it means that someone has made sure of that,” says Strategic Affairs Ministry Director General Ram Ben-Barak.

“The technology to create a nuclear facility in Iran has existed for many years. If the Iranians haven’t managed to get there, it means that someone has made sure of that,” said Strategic Affairs Ministry Director General Ram Ben-Barak on Saturday.

Ben-Barak has also served as deputy Mossad chief and was recently a candidate to be appointed head of the country’s foreign intelligence agency. Current National Security Adviser Yossi Cohen, himself a former senior Mossad employee, was given the job by Prime Minister Benjamin Netanyahu.

Speaking at an event in Beersheba, Ben-Barak was asked by the moderator whether Israel was working militarily and on the intelligence front to thwart Iran’s nuclear efforts.

“The State of Israel has done, is doing and will do anything it can, in military and intelligence terms, to make sure that Iran never acquires a nuclear facility,” Ben-Barak answered.

Ben-Barak was also asked to address the possibility of an Iranian response and replied that such a development was part of the decision-making process. Asked whether Israel was too late to tackle the Iranian nuclear problem militarily, Ben-Barak said that the issue was a complex one.

Regarding the threat posed by the situation in Syria, Ben-Barak said that senior Defense Ministry official Amos Gilad was right when he said Syria will never return to being what it was.

“More than 300,000 civilians have been slaughtered there in four years,” said Ben-Barak.

“This is what has been done by the Alawites, the community that President Bashar Assad belongs to, which is a minority in a country with a Sunni majority. Today I don’t see how the Sunnis will be accepting of an arrangement in which the Alawites remain in power. It’s reasonable to assume that in the end we will see a country of cantons, which will be constructed according to the relative majority found in each area — Alawites, Sunnis and Kurds, who will all eventually fight the Islamic caliphate state, which many countries are currently fighting against,” he said.