You are here: Home / Senza categoria / Israel, Iran and the US interest in South Caucasus 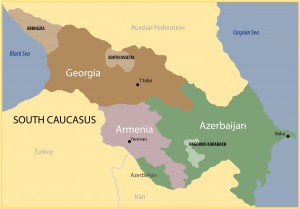 Donald Trump’s hostile posture against the Iran nuclear deal and Netanyahu’s sympathy for Trump are being watched with anxiety in Tehran, like reported by neweasterneurope.eu.

Yet Israel’s increasing presence in Azerbaijan is another source of alarm for Iran and Armenia, who are currently seeking closer relations. So, what is the American perspective on Israeli and Iranian presence in Armenia and Azerbaijan respectively; countries which are viewed by Russia as within its own sphere of influence?

“Trump is expected to take a more confrontational approach with Iran, showing no tolerance for even small breaches of what was agreed upon”, The Washington Post reported on January 11th. Donald Trump’s imposition of new sanctions on Iran in response to missile tests is a case in point. Among them Syria, Iraq, and Yemen are where the Iranian influence is strong. The Iranian Defence Minister, Hossein Dehghan, had stated that “Donald Trump’s election has led to ‘unease’, and that any war with Iran caused by his administration would ‘destroy’ Israel”. This Ahmadinejad-style statement is one explanation of what drives Israel to partner up with Azerbaijan in the neighbourhood of Iran. Moreover, Iranian Defence Minister nebulously threatened Azerbaijan saying that “we brought to the notice of our friends in Azerbaijan that providing Israel with access to this region will not serve their interests. Iran will not tolerate this”.

Prime Minister Benjamin Netanyahu referred to the bilateral relations with Azerbaijan as a role-model for the future of relations between the Arab world and Israel. Interestingly, but not surprisingly, it was Iran not the Arab nations who reacted harshly to the visit. The special representative of the speaker of the Iranian parliament fiercely condemned the trip saying “the visit of Netanyahu to Baku should be regarded as new conspiracy for the region”.

The Iran nuclear deal brought a thaw to Tehran’s accusations against Baku. Tehran had officially accused Baku of collaborating with Israeli intelligence and security services against Iran. One should not be surprised if Iran resumes this kind of accusation in case the Trump administration, which seems further aligned with Israel on the anti-Iran line than the Obama administration was, seeks to repeal the deal or pursues a policy that is perceived by Tehran as hostile.

Despite a few uncomfortable moments between the Azerbaijani government and the Obama administration, relations with Israel have remained close and strong.  The often manifested differences between PM Netanyahu and President Obama adversely have influenced the relationship between Baku and Tel-Aviv. For the Azerbaijani government, the partnership with Israel is a foreign policy success. This view is shared by the overwhelming majority of Azerbaijani people even including those who are in opposition to the government. After the 2016 US election, Baku officially supports President Donald Trump, as “Donald Trump and the figures he’s appointed to top national-security positions are all friends of Israel”. Considering the special relationship between the US and Israel, it is also in the interests of the US to support a growing partnership between the Jewish State and its rare Muslim ally, Azerbaijan. Also the military dimension of the partnership may “potentially undermine Russia’s nearly monopoly over arms sales to these conflicting post-Soviet nations [Azerbaijan and Armenia]”.

In the meantime, the US is not opposed to the burgeoning relations between Armenia and Iran. During the period of US sanctions on Iran, Washington turned blind eye to Yerevan’s relations with Tehran. With the lifting of sanctions following the Iran nuclear deal, the US ambassador in Armenia has been encouraging such relations. One reason is that a strong Armenian lobby in the US pushed for efforts to help Armenia ease the consequences of the isolation by Azerbaijan and Turkey, which came about as a result of the Nagorno-Karabakh conflict. Another even more important reason is that the US is interested in the reduction of post-Soviet nations’ dependence on Russia, including Armenia and Azerbaijan. In this context, the developing partnership between Yerevan and Tehran, and that of  Baku and Tel-Aviv are viewed as serving this objective from the US perspective. However, the question is: can they really limit the region’s dependence on Russia?

Moscow and Yerevan have signed an agreement to create a joint military force in Armenia.Moreover, a passport-free (using only internal passports) travel regime between the two nations has been introduced at the beginning of January 2017. These are the most recent symptoms of Armenia’s closer integration with Russia. Armenia goes in this direction knowingly because Russia acts as the main guarantor of the status-quo in the Nagorno-Karabakh conflict, with which Yerevan is happy at least for now. Otherwise, it would be much harder for Yerevan to ignore Azerbaijan’s insistence on the UN Security Council resolutions that call for unconditional withdrawal of Armenian forces from occupied Azerbaijani territories. Yet, the Obama Administration’s almost invisible role in the Nagorno-Karabakh conflict settlement amplified the symbiotic relationship between Yerevan and Moscow. Under such circumstances, it is becoming increasingly unrealistic for the US to hope for Armenia to reduce dependence on Russia.

Therefore, it would be most effective for the US to invest real efforts into resolving the conflict in order to pave the way for the restoration of relations between Armenia and Azerbaijan. This, in turn, would significantly ease the dependence of Armenia and Azerbaijan on Moscow. However Washington, in particular the Obama administration, was not active in doing so. Former Secretary of State John Kerry mentioned on one occasion that the leaders of Armenia and Azerbaijan were not ready to resolve the Nagorno-Karabakh conflict. But during his period of office as Secretary of State, Kerry made no visit to these countries let alone making active efforts to that end. As long as the Nagorno-Karabakh conflict is not resolved, the US position in the region does not look promising. A weaker US role leaves a gap in the region, which serves the interests of other actors. Tehran’s increasingly active role in the South Caucasus, with the lifting of sanctions on Iran, is just a case in point. Therefore, Washington should engage more actively in the settlement of the conflict rather than simply calling upon the other parties involved to resolve the conflict in general terms for the sake of box-ticking.