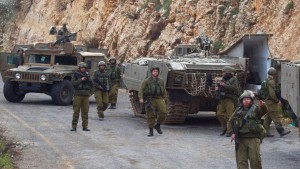 Israeli units patrolled the border with Lebanon and carried out a military exercise in the Shebaa Farms Monday, security sources told The Daily Star.

The sources said that Israeli vehicles were seen moving near the Lebanese border in the occupied farms, while residents of Kfarshuba said they heard loud explosions and a jet hovering around dawn.

Armored Israeli vehicles patrolled along the Blue Line from the military base of Al-Abbas to that of Mtolleh on the southeastern Lebanese border.

Some troops were also seen combing nearby orchards.

From the Lebanese side, UNIFIL and Lebanese Army troops observed the Israeli movements that another security source described as “just another routine patrolling operation.”

Meanwhile, Israeli media said the Jewish state’s army was mobilizing along the northern border after the recent escalation in the Golan Heights.

Israel said it carried out the strike after troops saw “a group of armed terrorists” approach the border with an explosive intended to target Israeli troops. It said that Israeli aircraft “targeted the squad, preventing the attack.”

It did not offer any casualty figure for the strike, while a security source told AFP that four people were killed in the attack, which took place near the town of Majdal Shams.

Israeli jets also hit Syrian and Hezbollah targets on the Syria-Lebanon border overnight Friday, according to a sources quoted by Al-Jazeera.

The attack in Syrian region of Qalamoun allegedly targeted the 155th and 65th Brigades of the Syrian Army, which deal with strategic weapons and long-range missiles.