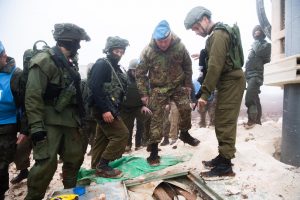 The Israel Defense Forces have set up a special engineering corps company to discover and prevent terror tunnels dug across Israel’s northern border from Lebanon, like reported by algemeiner.com.

The new company is intended to deal with the long-term threat from tunneling attempts by Hezbollah, Israeli news website Mako reported on Sunday. It will use cutting edge technology to do so, most of it tested on Hamas tunnels dug from Gaza, but adapted to the northern terrain, which is quite different.

The main tactic employed by the company is the use of new technology, and as a result is heavily invested in research and development.

One department deals with developing technologies to detect tunnels and tunnel digging activity, while another examines the practical engineering means of interdicting and destroying them.

The head of the company, Captain Moshe Asraf, said it was established according to the “lessons” learned during last year’s Operation Northern Shield, during which he served as a commander in the engineering corps.

“Our goal is to get out in front of this,” Asraf said, “and to produce a professional unit in the field that will specialize in the sector, the enemy, and the terrain.”

Operation Northern Shield exposed and destroyed what is believed to be all the tunnels dug so far by terror group Hezbollah in order to invade and attack Israel’s north.