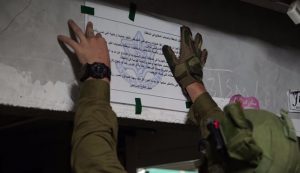 In addition, Israeli security forces operating in Judea and Samaria overnight raided facilities used for the production and distribution of anti-Israeli propaganda, used to incite locals to commit acts of terror.

Among the facilities closed was a printing house in the city of Hevron, south of Jerusalem, which had been used to produce flyers, posters, and other materials used to promote terrorism.

In a separate operation in the city of Shechem (Nablus), Israeli security personnel confiscated equipment used to produce terrorist propaganda on behalf of the Hamas terror group.

An IDF spokesperson said the Hamas operation in Shechem was just the latest example of the Gaza-based organization’s attempt to gain influence in Samaria.

“The discovery of the [Hamas] operations shows us once again the Hamas terror group’s unending attempts to promote terrorism in Judea and Samaria,” the spokesperson said.

“The operation is part of wider efforts to stop incitement, which is directly linked to terror attacks, inspiring them and supporting terrorism.”