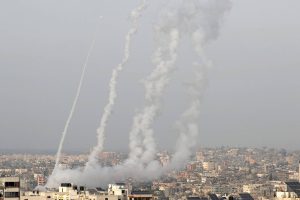 Israeli forces struck over 100 targets across the Hamas-ruled Gaza Strip overnight in response to a series of rocket attacks, an IDF spokesperson said Tuesday morning, like reported by israelnationalnews.com.

More than 130 terrorist targets were hit by Israeli airstrikes late Monday night and early Tuesday morning, after terrorists operating out of the Gaza Strip launched over 200 rockets into Israeli territory.

In the third wave of airstrikes, IDF forces hit a series of Hamas and Islamic Jihad positions in Gaza, including additional weapons manufacturing facilities, military training camps, and the home of a senior Hamas military commander.

In addition, Israeli forces hit a Hamas military intelligence center in the Gaza Strip, along with two terror tunnels running close to the Israeli border.

A total of 15 terrorists were confirmed as being eliminated in the Israeli strikes. The Gaza health authority claimed that a total of 24 people, including civilians, were killed in the airstrikes, with over 100 wounded.

The Israeli military announced Tuesday morning that Operation Guardian of the Walls would continue throughout the day.

“Our attacks are just the beginning,” said IDF spokesperson Brig. Gen. Hidai Zilberman. “We have an intense day ahead of us, which will be a clear continuation of what we did last night.”

“We will attack anyone who points their weapons at us or threatens us with terrorism.”