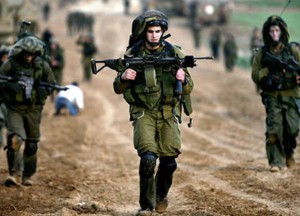 The Israeli military has mobilized hundreds of thousands of reservists for a surprise three-day drill, military officials said Monday.

As part of the drill, reservists will receive a mock telephone message in order to test if the call-up system works. Thousands of them will be asked to show up physically in their bases at short notice.

Israel Radio quoted a senior military official as saying that “this is one of the largest ever drills to test the army’s call-up system.”

Focusing on southern and northern Israel, the drill was designed to exercise mock rocket attacks from the Gaza Strip and Israel’s northern border.

During the call up, the reports said, the Israel Air Force will also place its air bases in emergency mode, and practice rapidly translating intelligence data into air strikes.

The Israel Navy will also take part, testing its infrastructure, and for the first time, cyber defenses will be included as “a part of a General Staff exercise,” the reports said, quoting a military source.

The Home Front Command’s search and rescue battalions will hold a number of drills, including one at a mock disaster site in the central Israeli city of Holon throughout Monday.

Asked about the timing of the drill, a military spokesperson said the drill “is not necessary linked to anything.”

Tensions have been on the rise since the collapse of the U.S.-brokered peace talks between Israel and the Palestinians in April, and the escalated violence between the two sides after the 51-day Gaza war last year.

Israel also rejected the recently announced nuclear agreement between the world powers and Iran, which it considers as its arch-foe.

Israeli Prime Minister Benjamin Netanyahu believes that the sanction relief will enable Iran to use hundreds of billions of dollars to finance militant groups against Israel, such as Lebanon’s Hezbollah and Gaza’s Hamas.