You are here: Home / Mediterranean / Israel: Hamas is turning Gaza into a laboratory for future drone warfare 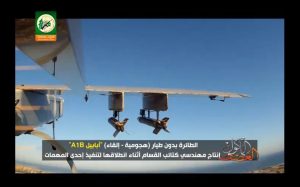 Israeli intelligence believes that Hamas is focusing on greatly improving its drone capabilities in the Gaza Strip, in light of Israel’s success in intercepting rockets and destroying, cross-border tunnels. Rebels and terror organizations in the region are increasingly using attack drones, as was apparently the case earlier this month in an assault on Russia’s airbase in Syria, like reported by haaretz.com.

The use of drones by such Middle Eastern organizations is not new, of course. Hezbollah launched three Iranian-made Ababil reconnaissance drones into Israeli territory in the 2006 Second Lebanon War, all of which were shot down by Israel Air Force fighter jets. Hamas has also a number of Ababils, which have been spotted over Gaza, but these drones are mainly used for surveillance and have been easily located, tracked and intercepted. In the decade since the Ababil reached Hezbollah and Hamas, the entire drone industry has changed, opening up new possibilities for changing the battlefield.

Driven by commercial demand, the mass production of small and increasingly capable drones and quadcopters has made these unmanned aircraft cheap and accessible. It was a matter of time before they would be utilized by resourceful armed organizations that don’t have the financial resources of a state.

A number of the groups fighting in the Syrian civil war have produced footage shot by cameras on drones. Hezbollah even disseminated a video claiming to show a bomb being dropped by one of its drones on rebel positions, although the image may have been photoshopped.

The attack that took place three weeks ago on Russia’s Khmeimim airbase on Syria’s Mediterranean coast seems to have been much more ambitious.

There are different versions of what happened there. The Russian military originally denied there had been an attack, but then acknowledged it had taken place. There may have been more than one attack and according to some reports, soldiers were killed and aircraft damaged. What does seem to have happened was that a “swarm” of drones – between 10 and 12 – were launched on a “suicide” mission from a point that was over 20 kilometers (about 12.5 miles) east of the base. The drones, which were filled with explosives and guided by GPS, were either programmed, or controlled from afar, to impact on the base’s runway.

Russia claims to have intercepted and shot down seven of them with anti-aircraft missiles; other reports say the drones got through and caused extensive damage. Either way, this seems to have been the most complex drone strike ever undertaken by a non-state actor. It was likely carried out by Harakat Tahrir al-Sham, or HTS – an Islamist rebel group aligned with Al-Qaida.

The drones themselves, at least those presented by the Russian military to the media, are not particularly sophisticated, and wouldn’t have cost more than a few thousand dollars, probably less. However, the way they have been upgraded and used in this operation is unprecedented.

“Hamas are working on similar things now in Gaza,” said a senior Israeli officer last week. Development of its drone wing makes sense for Hamas, as its previous investments in building a large rocket arsenal in the Strip and in creating a network of cross-border tunnels to attack Israeli targets have been rendered near-obsolete.

Israel’s Iron Dome missile defense system has achieved an interception rate of over 90 percent, and newly installed underground sensors have detected tunnels, which have been promptly destroyed. Hamas is now investing in new attack options, acquiring and upgrading drones and training frogmen.

In recent years, during military parades in Gaza, Hamas has showcased some of its drones, but following the assassination in Tunisia in December 2016 of Mohammed Zawahri, an engineer believed to have been developing drones for the Islamist organization, it has lowered the profile on its drone project.

Hamas has accused Israel of being responsible for Zawahri’s death. Six months ago, Al Jazeera claimed that Hamas had received 30 drones that were manufactured by Zawahri’s team, with Iranian guidance. But the most recent reports from Syria demonstrate that an organization like Hamas doesn’t necessarily need a state to supply it with ready-made drones or knowhow.

The drone threat on the Gaza border is not new. For a couple of years now, Israel Defense Forces officers stationed there have reported a major increase of small quadcopters hovering over them. Meanwhile, a number of armies and defense industries around the world are developing anti-drone systems, utilizing everything from shotguns, nets, sniper-rifles, radio signal jammers and electronic warfare systems to commandeer the drones and land them safely. Senior defense sources have said that Israel is working on a variety of countermeasures, but no details have been disclosed.