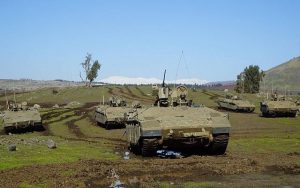 Israel is preparing ground forces along the Gaza border for a possible invasion of the Palestinian enclave as Hamas launched more rockets at Israeli neighborhoods Thursday, like reported by voanews.com.

Air raid warnings sounded across southern Israel for the fourth consecutive day, while some rockets even reached as far north as Tel Aviv.

Israeli military forces say Hamas has fired 1,600 rockets across the border since Monday, with the majority intercepted by Israel’s Iron Dome missile defense system, while about 400 rockets fell short of their targets and landed inside Gaza.

Israel has responded to the rocket barrages with devastating air strikes on Hamas-controlled targets in Gaza, including Hamas rocket launch sites, intelligence offices and the homes of Hamas leaders.

Several commanders of the Hamas militant group have been killed in Israeli airstrikes in the Gaza Strip, Hamas and Israel announced Wednesday. The dead commanders include Bassem Issa, the leader of Hamas’ military operation in Gaza City, as well as the group’s engineering chief and the heads of cyber warfare and rocket development.

The deadly exchange of rocket fire and airstrikes, the biggest fighting between the Palestinian militant group and Israeli forces since the 2014 war in Gaza, were sparked by growing unrest over control of Jerusalem and attempts by Jewish settlers to take over Arab-controlled communities.

The tensions have spilled over into the West Bank, where bloody clashes have broken out in several Arab-Jewish cities. Authorities have imposed a nighttime curfew in the central city of Lod, where at least one person was shot this week, while several hundred people in Lod and other cities have been arrested. A mob of right-wing Jewish residents in the town of Bat Yam brutally attacked an Arab motorist, beating him unconscious.

U.S. President Joe Biden on Wednesday expressed his support for Israel’s right to defend itself, while saying he hoped the fighting would end “sooner than later.”

After U.S. Secretary of Defense Lloyd Austin spoke Wednesday with his Israeli counterpart, Benjamin Gantz, the Pentagon released a statement saying Lloyd informed Gantz of the Pentagon’s “ironclad support for Israel’s legitimate right to defend itself and its people.”

The statement said Lloyd “strongly condemned the launching of rockets by Hamas and other terrorists [sic] groups that targeted Israeli civilians” and “reiterated the importance of all involved parties to take steps to restore calm.”

U.S. Secretary of State Antony Blinken similarly condemned the Hamas attacks on Israeli civilians in a conversation with Israeli Prime Minister Benjamin Netanyahu, declaring “Israel has the right to defend itself” while the Palestinians must be afforded the right “to live in safety and security” while calling for deescalation.

Blinken also said he instructed Hady Amr, the deputy secretary of state for Israel and Palestinian affairs, to leave immediately for the Middle East to urge Israeli and Palestinian officials to deescalate.

Germany’s justice minister, Christine Lambrecht, said Wednesday that Germany is “strongly on the side of Israel” and added it “has the right to defend itself.”

Lambrecht also criticized recent anti-Semitic acts such as Israeli flag-burnings near synagogues in Germany, saying they show “nothing but horrible disrespect for human dignity.”

During a conversation Wednesday with Russian President Vladimir Putin.

Erdogan said the global community should “give Israel a strong and deterrent lesson” over its attacks on Palestinians, according to Turkey’s Presidential Communications Directorate.

The directorate said Erdogan suggested to Putin that the establishment of an international force to protect the Palestinians should be considered.

The U.N. Security Council was holding an emergency closed-door meeting Wednesday to discuss the situation. Sources say the United States is delaying efforts by the council to issue a formal statement on the escalating fighting out of concerns it could harm behind-the-scenes efforts to end the violence.

The recent violence follows weeks of mounting tensions and confrontations between Palestinians and Israeli troops in the city, sparked in part by Israeli plans to carry out evictions of Palestinian families in a neighborhood of east Jerusalem.

A lawsuit over the evictions has reached Israel’s Supreme Court. However, the court postponed a key ruling in the case Monday, citing the “circumstances.”

To avoid the clashes, Israeli organizers of a march to celebrate the Jewish state’s 1967 capture of east Jerusalem altered its parade route to avoid the Muslim Quarter of the Old City.

Israel considers all of Jerusalem as its unified capital. The Palestinians want east Jerusalem to be the capital of a future state.