You are here: Home / Mediterranean / Israel focuses on Hezbollah as Syrian conflict winds down 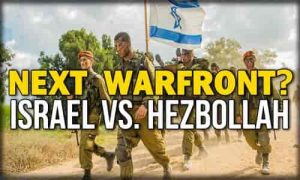 With President Bashar Assad seemingly poised to survive the Syrian civil war, Israeli leaders are growing nervous about the intentions of his Iranian patrons and their emerging corridor of influence across the region, like reported by toi.com.

Prime Minister Benjamin Netanyahu is agitating against Iran in global forums such as this week’s UN General Assembly.

The Israeli military is holding war games targeting the Iran-backed Lebanese Hezbollah, and generals are issuing tough threats in hopes of avoiding what could be another ruinous Israeli entanglement in Lebanon, this time with Iranian advisers and troops on Israel’s doorstep.

Israel has long identified Iran as its biggest threat, citing its suspect nuclear program, development of long-range missiles and hostile rhetoric. But gains by Syrian troops and their Iranian-backed allies have given those concerns new urgency.

Israel fears the establishment of a Shiite “corridor,” with land links from Iran to Lebanon, allowing the movement of fighters and weapons across the region.

At the heart of those fears is Hezbollah, the Lebanese militia that battled Israel to a stalemate in a month-long war in 2006. The group has greatly beefed up its arsenal of rockets and missiles since then, and after years of fighting in Syria, is more battle-tested than ever.

In his UN address Tuesday, Netanyahu warned that Iran was spreading a “curtain of tyranny and terror” across the region, and said Israel would defend itself.

Israel last week wrapped up its largest military exercise in two decades — mobilizing some 30,000 troops to train for the next war against Hezbollah.

In an exclusive interview with The Associated Press, the commander of the exercise, Maj. Gen. Tamir Hayman, said that despite Hezbollah’s gains, the balance of power has greatly shifted in favor of Israel since 2006.

“If Hezbollah’s capabilities have grown linearly, ours have grown exponentially, in intelligence, in targets and in the ability to attack,” he said. If fighting resumes, “the damage to Hezbollah will be severe, mortal and comprehensive.”

He said he was pleased with the performance of his troops, and said the two-week drill should send a powerful message of deterrence.

“We have no intentions at this time to go out and defeat Hezbollah. Our goal is to maintain the quiet and stability in the north,” said Hayman, the commander of the army’s Northern Corps.

Israeli forces on Tuesday shot down what Israel said was a Hezbollah surveillance drone that veered too close to the Syrian border with Israel. The military said the unmanned aircraft was Iranian-made and launched from a Damascus airport before it was shot down near the Israeli-controlled side of the Golan Heights.

After six years of fighting that claimed at least 400,000 lives, Assad’s forces appear to have finally gained the upper hand as they recapture territory from the Islamic State group and opposition fighters.

Russia, which is waging an air campaign on behalf of Assad, and Iran and Hezbollah, which have fighters on the ground, have provided crucial support and are expected to play a major role in postwar Syria.

“The vector is quite clear right now, with the Syrian army, Hezbollah and the Shiite militias gradually regaining control of large swaths of the country,” said Chagai Tzuriel, the director general of the Intelligence Ministry.

Israel has said any permanent presence of Iranian or Hezbollah troops along the Syrian border with Israel would be crossing a “red line,” hinting that it would be willing to take military action if needed. Tzuriel warned of a “regional conflagration.”

He said Russia could end up playing a positive role, because it wants to stabilize Syria. He said the Russians realize that Iran could create friction not only with Israel, but also with the Sunni majority in the region.

“I think there is a good chance that it will limit and restrain Iran, Hezbollah and the Shiite militias,” he said.

But that is far from clear. Netanyahu last month flew to Russia to discuss Syria with President Vladimir Putin, but apparently returned home emptyhanded.

Israeli media last week said Russia had rejected an Israeli request to keep the Shiite forces at least 60 kilometers (40 miles) from the border.

Intelligence Minister Yisrael Katz recently claimed at a security conference that Iran and Syria are working on an agreement that could bring an Iranian naval base, airport or army bases to Israel’s doorstep, a major boost for Hezbollah.

“The Iranians may bring different kinds of missiles to Syria, and a large and well-equipped force of Shiite militias may settle there, including tens of thousands of Afghans, Pakistanis, Iraqis and Syrians whose goal is to threaten and battle Israel,” Katz said. “Hezbollah will train and command the Shiite militias.”

Israel has attempted to stay on the sidelines throughout the Syrian war. But it has admitted to carrying out dozens of airstrikes on what are believed to be shipments of “game changing” weapons, such as guided missiles or anti-aircraft systems, bound for Hezbollah.

Syria accused Israel of carrying out a recent airstrike against a Syrian military facility, possibly linked to either missile production or chemical weapons.

Hayman said last week’s drill was only focused on Lebanon, and that Israel would try to keep any future fighting from spreading beyond Lebanon.

After years of fighting in Syria, Hezbollah does not appear to be in a rush to battle Israel. The group has lost an estimated 1,500 fighters in Syria and is also suffering from low morale and financial pressure.

But as it withdraws from Syria, it is expected to look south, to its main nemesis.

“Hezbollah now has a force similar to those of a conventional army without losing its experience in guerrilla warfare,” said Qassim Qassir, a Lebanese expert on Hezbollah. “Hezbollah today is stronger than before and this is what made Israel carry out this drill to show their force.”