You are here: Home / MidEastGulf / Israel drawn into Syrian war by Islamist threat to Druze 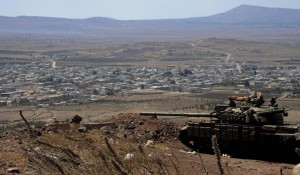 Israel is being drawn deeper into the Syria conflict as Islamist militants pose a growing threat to the Druze community on its northern frontier.

Israeli army chief Gadi Eisenkot told a parliamentary panel Tuesday that the military would act if needed to prevent a massacre of Druze on the Syrian side of the Golan Heights, whose southern section Israel controls. Druze citizens of Israel, who had kept a low profile on the conflict in Syria, are now demanding their country help co-religionists there after the al-Qaeda-affiliated Nusra Front killed more than 20 in a recent attack.

“I expect Israel to assist the Druze, just like it helps Jews all over the world,” Deputy Minister for Regional Cooperation Ayoub Kara, a Druze lawmaker from Prime Minister Benjamin Netanyahu’s Likud party, said in a phone interview. Kara, who is leading a campaign for Israeli involvement, called for “major humanitarian aid” to be sent immediately.

The plight of Syria’s Druze has Israeli officials breaking previous pledges to stay neutral and as removed as possible from Syria’s civil war. The shift could put Israel into the position of being besieged by Druze requests for sanctuary.

Druze are an offshoot of Shiite Islam. About 700,000 live in Syria and 140,000 are citizens of Israel. About 20,000 more live in the southern section of the Golan that Israel conquered from Syria in the 1967 Middle East war. An additional 215,000 live in Lebanon. Many are joined across borders through family ties.

The Nusra attack that killed 23 Druze in the Idlib region was the deadliest against the community since Syria’s conflict started in 2011, according to Rami Abdurrahman, head of the Syrian Observatory for Human Rights, which monitors the fighting through activists on the ground.

Thousands of Druze in Israel and the Israeli-held Golan have staged protests in recent weeks to demand an Israeli response to the predicament of the Syrian Druze, be it through military action, the establishment of a safe zone for refugees or humanitarian aid.

Israeli President Reuven Rivlin, whose military attache is a Druze, publicly raised concerns over the predicament of the Syrian Druze with General Martin Dempsey when the U.S. military chief visited Jerusalem last week. Netanyahu and Defense Minister Moshe Ya’alon also discussed the Druze situation with Dempsey, according to a government official who wasn’t authorized to comment on record.

Israel recently warned the Nusra Front, via the Free Syrian Army rebel group, not to attack the Druze, the Jerusalem Post reported Tuesday, without citing sources. Nusra has apologized for the June 10 killings in Idlib, calling them an “unjustified mistake” committed by local fighters.

Walid Jumblatt, leader of Lebanon’s Druze community, said in remarks posted on his Twitter account on June 11 that he “rejects and warns of Israeli incitement over the Arab Druze in Syria.”

Israel’s Druze have so far raised about 10 million shekels ($2.6 million) for their Syrian co-religionists, Kara says, without ruling out the possibility that some of that money may be used to buy arms.

“I’m pretty sure the government is looking into ways to get weapons to the Druze, if they’re not already doing so,” said Moshe Maoz, professor emeritus of Middle East Studies at the Hebrew University of Jerusalem, and a top Syria export.

The prime minister’s office and Defense Ministry had no comment on the Druze.

Increased involvement with the Druze may pose a problem for Israel if it suddenly finds itself facing a stream of refugees seeking shelter on its side of the Golan. Kara, who visited Jordan last week to get assurances from officials there for safe passage for Druze refugees, says Israel may also have to consider that option if the Syrian situation deteriorates.

On the plus side, aiding the Syrian Druze, who once professed loyalty to the regime of President Bashar Assad, will serve Israel’s strategic interests, he said.

“They are no longer on the side of Assad,” Kara says. “The Druze in Syria are not Israel’s enemies — they’re the enemies of our enemies.”

Maoz concurs on the possible benefits of assisting the Druze.

“The battle in Syria between Assad and the Islamists is, for Israel, like a choice between cholera and the plague,” he said. “Our best option would be some kind of moderate Sunni state on our northern border, and the Druze could become a part of that.”