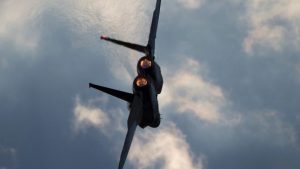 The Israel Air Force destroyed around 100 Syrian missiles in its attack last month on weapons in Syria − many of which were due to be delivered to Hezbollah, a senior Israeli officer said according to haaretz.com.

The officer, however, did not give details on the kind of missiles that were destroyed.

The episode marked a rare admission that Israel had taken military action in Syria, and the officer said the Israel Defense Forces had acted “not once” in similar situations.

Last month’s attack triggered an immediate retaliation by the Assad regime, which fired SA-5 surface-to-air missiles at the Israeli planes, marking a stark change in Syrian policy. None of the Israeli jets were damaged.

The Israelis’ Arrow missile defense system, meanwhile, shot down one of the Syrian missiles north of Jerusalem, marking the system’s first operational use.

According to the officer, while the Syrian regime knew that its outdated missiles would not hit the Israeli planes, the very firing at the jets reflected the regime’s confidence to act and changed security outlook − which the officer said stemmed from the support of Russia, Iran and Hezbollah.

Meanwhile, the officer said the situation in North Korea could have an effect on Israel’s security. He said a confrontation between Washington and Pyongyang would divert American attention from events in the Middle East and decrease American influence in the region.