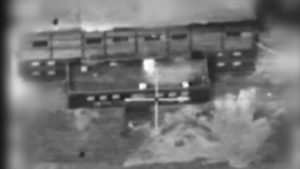 Media outlets affiliated with the Syrian opposition reported on Tuesday that Israel had attacked warehouses of weapons used by Iranian militias near the Dara-Damascus road, like reported by inn.com.

The Syrian Center for Monitoring Human Rights reported that the explosions were heard in the north of Daraa, in an area controlled by Syrian President Bashar Al-Assad’s forces.

Assad’s army has recently been operating with Russian air support to capture the city of Dara, which is considered the symbol of the rebel movement.

Last week, Prime Minister Binyamin Netanyahu referred to Israel’s attacks on Syria and said at the graduation ceremony of the pilots’ course that “We blew up Iran’s cash machine. The ones who provided the most cash to Iran were stopped short, and the Iranian people are feeling it in their pockets. The IDF, and the Air Force, will continue to act with force against Iranian targets in the area.”