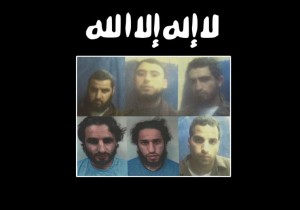 Israel has arrested six Bedouins, including four elementary and high school teachers, and indicted them for their alleged support of Islamic State peoples and the promotion of the jihadist ideology, the Shin Bet security service has announced.

The men from the Negev town of Hura, whose arrests took place over the last two months, were allegedly planning to join and fight with ISIS in Syria, Shin Bet said in a statement on Monday.

The men met “in secret to study the doctrine of [the] Islamic State,” a statement said, adding that suspects planned to “spread the ideology of this group among their family and friends.”

Prior to their arrest, the teachers from elementary and high school, were promoting the jihadist ideology during their classes, the statement added.

According to the Shin Bet the suspects, all members of the same family, conducted secret gatherings where they discussed Islamic State ideology and watched ISIS propaganda videos and speeches by the jihadists leaders.

The teachers’ support of ISIS “is a cynical exploitation of their duties and a violation of the trust given to them by the education system and by parents and students,” Shin Bet said in the statement.

The suspects were indicted in the Beersheba District Court on charges including distribution of an illegal organization’s materials, support for a terrorist organization, and conspiracy to commit a crime.

According to one indictment. Jerusalem post reports, one of the accused, met an extremist cell once or twice a week next to a mosque in Hura, from the end of 2013 until June 2015.

In connection with the ongoing investigation, a principal and a number of fellow teachers were questioned. All of them denied any knowledge about the teachers’ alleged illegal activities.

Meanwhile a hearing with Education Ministry officials has put forward a motion to revoke the teaching licenses of the indicted men.

“Teachers will not be terrorists in Israel. I asked them to be fired for educating for terror. We will have zero tolerance for those who advance terror,” said Education Minister Naftali Bennett.