You are here: Home / Analysis / Israel and Iran: is a war brewing? 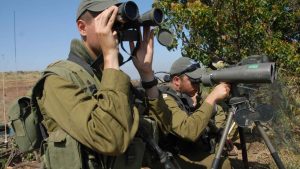 Last Saturday (February 10, 2018) Iran’s Islamic Republic resumed its provocation of Israel by sending a drone over Israeli territory. It was answered by force as expected.  An Israeli Apache Helicopter shot down the drone (it has not been verified whether the drone was armed or not) over northern Israel.  Iran’s involvement in Syria, including the deployment of Iran-backed Shiite militias, near Israel’s Golan Heights, has alarmed Israel like reported by frontpagemag.com.

Israel has accused Iran of building precision-guided missile factories for Hezbollah in Lebanon.  As Iran and its sponsored Shiite militias, including the Lebanese Hezbollah, continue to encroach on Israel’s border, Jerusalem has vowed to defend its territory and its people. A year ago, Israel’s missile defense batteries intercepted and destroyed several Iranian built drones used by Hezbollah to penetrate Israel’s airspace from Syria.  Saturday, Israeli fighter jets were able to hit and destroy the aerial defense system around Damascus that Russia helped to build.

In retaliation over Iran’s drone attack, eight Israeli F-16 Fighter jets attacked numerous military targets inside Syria, including an airfield near Palmyra called T-4 base, where the drone originated.  One of the F-16 fighter jets was damaged during the attack while on the way back from the operation inside Syria.  Its two pilots managed to parachute down over Israeli territory. The F-16, which was abandoned by the pilots, crashed inside Israeli territory. One of the pilots was wounded, but is expected to fully recover.  The Syrian and Iranian media and government spokespeople celebrated the “downing” of the Israeli F-16 as a major accomplishment. Following the damage to the Israeli Fighter jet, a squadron of Israeli F-16’s returned to Syria and wiped out the Syrian/Iranian air-defense system throughout the Assad dominated Syria.

Israel’s Prime Minister Benjamin Netanyahu declared on Sunday (February 11, 2018) that “Yesterday we dealt severe blows to the Iranian and Syrian forces.  We made it unequivocally clear to everyone that our rules have not changed one bit.  We will continue to strike at every attempt to strike at us.  This has been our policy and it will remain our policy.”  Yoav Galant, retired former army general, Cabinet Minister, and a member of Netanyahu’s Security Cabinet, told the Associated Press that “we do not just talk, we act.” Galant, a former IDF Deputy Chief of Staff, added, “I think that the Syrians now understand the fact that hosting the Iranians on Syrian soil harms them.” Israel’s Intelligence Minister Israel Katz told Army Radio that “They and we know that we hit, and it will take them some time to digest, understand, and ask how Israel knew how to hit those sites (a reference to the air-defense systems). These were concealed sites and we have intelligence agencies and the ability to know everything that is going on there, and yesterday we proved it.”

According to Arab News (February 11, 2018), Iran’s President Hassan Rouhani, addressing a flag-waving crowd at the central Tehran’s Azadi Square, said that “They (a reference to the U.S. and Israel) wanted to create tension in the region…they wanted to divide Iraq, Syria…They wanted to create long-term chaos in Lebanon but…with our help their policies failed.”  For the Iranian-Shiite coalition, this day of fighting (Saturday, February 10, 2018) led to what Hezbollah has called “a new strategic era.”

In seven years of Iranian involvement on behalf of the Assad regime in the Syrian civil war, it was able to show a number of solid achievements, including saving the Alawite-led (a syncretic sect of the Twelver branch of Shiite Islam) Assad regime from total collapse.  Tehran, with Russian help, solidified Assad’s rule (but as their own puppet), and the Assad regime now controls two-thirds of Syria’s territory.  It is at this point that the Islamic Republic of Iran intends to change the balance of power on the Syrian-Israeli border. The Iranians took advantage of the chaos inside Syria to build up military assets that would target Israel, while at the same time, providing advanced weaponry to Hezbollah in Lebanon.

Iran is seeking to establish the Shiite Crescent or a land corridor from Iran through Iraq and Syria, to the Mediterranean Sea.  Even more important for the Tehran regime is to have a permanent presence and military bases on Syrian soil.  Now that it has consolidated its presence in Syria, Iran has turned its focus on the last obstacle that stands in its way to achieve its ultimate goal of becoming the regional hegemon – Israel.

Throughout the Syrian civil-war, Israel stayed largely out of it.  Israel did however launch occasional airstrikes on weapon convoys headed from Iran to the Hezbollah terror group.  In recent months though, Israel turned its attention to military sites suspected of hosting Iranian Islamic Revolutionary Guards Corps (IRGC), and Shiite militias recruited by Iran from Afghanistan, Iraq, Lebanon, and Yemen, being too close to its borders.

To sum up the effects of Israel’s operation, on February 10, 2018 Iran suffered casualties from the Israeli assault, as did the Syrian army. Israel managed to destroy a large number of Syrian anti-aircraft batteries, mainly SA-5 and SA-17 missiles, including some that were just received by Syria.  In addition, the Israeli raid destroyed a Syrian radar installation upon which the Syria’s air defense depend on. According to a statement by the IDF, this was the most painful blow against Syria’s air defense system since the First Lebanon War in 1982. When the smoke finally cleared over this day of fighting, each of the sides could have claimed a heroic victory, as well as a loss of assets. Israel lost one of its fighter jets and now finds itself susceptible to Iranian penetration.  Iran paid a price for violating Israeli sovereignty but the Assad regime paid the heaviest price for its participation in the incident.

Insofar as Israel’s defense policy is concerned, being surrounded by Iranian IRGC troops and Hezbollah forces in Lebanon and on its Golan Heights border with Syria, is intolerable and must not stand. The Iranians are not necessarily seeking a full-scale war with Israel at this time.  They will be content to change the existing equation, by forcing Israel to limit or stop its operations in Syria.  Israel, for its part, must prove the effectiveness of its deterrent power, by demonstrating to Bashar Assad that any attempt by Iran and its clients to deter Israel from acting in self-defense would exact a heavy price. This comes in direct conflict with Iran’s schemes to surround Israel with potential missile batteries that could reach all points inside Israel.  Israel’s natural reaction to these irreconcilable Iranian threats might eventually lead to a war between these two Middle Eastern powers.