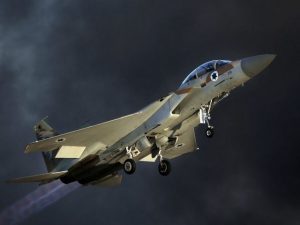 According to Lebanese media, the targets that were hit around 3.00 a.m. were affiliated with the Assad regime and were the regime army’s 3rd Division in the al-Katif suburbs of the capital.

The report also claimed that the IDF struck from within Lebanon, circling the Beqaa Valley and Baalbek, so as not to be blocked by the Russian defense systems operating in the area.

The IDF Spokesperson’s Unit declined to comment on the reports as the army does not respond to foreign reports.

The alleged attack comes after a week during which Hezbollah’s leader Hassan Nasrallah made several aggressive statements in an appearance on Iranian television as well as in interviews with the Lebanese media.

The terror organization’s leader threatened to attack Israel in the near future, saying that “Hezbollah will have no red lines in the next war with Israel,” and also warned Israel from entering into a conflict with Hezbollah: “Israel should think a million times before it goes to war with Lebanon.”

Last week Lebanese President Michel Aoun defended the weapons which Hezbollah has, saying the arms of the terror group are an essential part in defending Lebanon against Israel.

“Hezbollah weapons are not contradictory to the state, but are an essential part in defending the country. As long as a part of the territory is occupied by Israel, and as long as the army is not powerful enough to fight Israel, we feel the need to maintain the weapons of the resistance to complement the army,” Aoun told the Egyptian TV network CBC satellite channel.

Israel and Hezbollah fought a deadly 33-day war in 2006, which came to an end under UN Security Council Resolution 1701, that among other things called for the disarmament of Hezbollah.

The border with Syria has been tense since the civil war there erupted in 2011, and while Israel has never publicly admitted to carrying out any strikes, Israel is suspected of carrying out occasional retaliatory strikes on Syria after stray rockets or mortar rounds struck Israeli territory.

Last April, Prime Minister Benjamin Netanyahu admitted for the first time that the IDF had carried out strikes in Syrian territory and in December Defense Minister Avigdor Liberman said that Israel struck targets in Syria to prevent the smuggling of sophisticated weapons to Hezbollah.