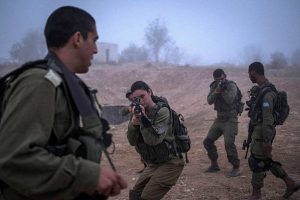 Israeli newspaper Maariv reported that the Israeli army formed a Special Reserve Force, made up of local residents from the Nitzana neighbourhood – which lies adjacent to the Egyptian borders – in order to respond against attacks from the Islamic State group (IS) and confront the terrorist organization.

The force will work alongside former vets of the Israeli army, as well as former members of Israel’s police forces, with the purpose of launching rapid counter-responses against IS, after the group’s growing presence in the Israeli-bordering North Sinai.

Maariv quoted an unnamed Israeli military officer, responsible for a military unit on the Egyptian-Israeli borders, as saying that the force will lay the foundation for forming a major military unit to respond to terrorist threats in the region.