You are here: Home / West Asia / Islamists on the march in Karachi 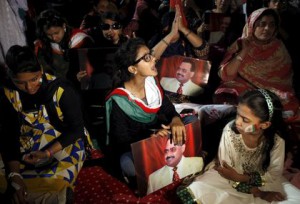 If you haven’t heard of Karachi, the world’s second-most populated city, ask your grandparents.

They may have heard of it referred to as the “City of Lights”.

At the time of the British Raj, it was the most cosmopolitan metropolis in India, a place that boasted of being the stopover city of choice for multi-day flights from Britain to Australia.

Today it is shunned by European and American airline companies.

Even after the end of the Raj, when Karachi became the capital of the new, artificially-created Islamic state of Pakistan, its majesty remained undiminished.

Catholic churches, Baha’i Temples and Zoroastrian places of worship were part of the city’s religious infrastructure, despite its overwhelming Muslim population.

Then came the 1980s, Arab petro-dollars, Islamism, jihad, the Afghan war and the rest is history.

Karachi today is a time bomb waiting to explode, the consequences of which will spell disaster in the region and beyond.

Today, 20,000 Pakistan army troops from the dominant northern province of Punjab are patrolling the city, arresting people in an attempt to liquidate the most popular political party, the Muttahida Qaumi Movement (MQM).

MQM followers – representing the Urdu-speaking community that migrated to Pakistan from India in 1947 – are no angels.

But in the land that nurtured the likes of Osama bin Laden and Mullah Omar, they form the only party that is openly secular and has stood up to the Islamists.

So far the Pakistan military, operating under the innocuous and harmless-sounding label of “Rangers” has abducted 4,000 young men, according to the MQM and are also alleged to have conducted extra-judicial killings.

Last month, the Washington Post covered the troubles of Karachi and interviewed a number of MQM activists, who claimed the Army tortured them.

One victim told the Post, he and his brother were held for a week, never charged, but tortured and threatened with castration.

“(T)hey beat us without any reason … They said, ‘If you are married, we will make you impotent.'”

The military versus MQM clash in Karachi has now spilled into the international arena.

Party leader Altaf Hussain, living in exile in Britain, has called for intervention by the United Nations, NATO and India to stop the persecution of Pakistan’s Urdu-speaking minority.

On July 30, the MQM sent a letter to UN Secretary General Ban Ki-moon, asking him to intervene.

The Pakistan government in Islamabad denies the allegations.

It claims the actions by its military in Karachi do not target any single political party or ethnic group, that the objective is simply to establish law and order.

However, while the military rounds up MQM workers, a Wall Street Journal report from Karachi suggests it is also facilitating the establishment of an Islamist militia in the city.

Radicals from the Islamist Ahle Sunnat Wal Jamaat (ASWJ) are moving into strongholds of the secular MQM. Far from facing any obstacles, the Islamists’ leader, Ahmed Ludhianvi, has police protection, as do other senior ASWJ officials.

For thousands of Canadians who were born in Karachi, developments back home are deeply worrying.

Sohail Raza who heads “Muslims Facing Tomorrow” told me: “Its very worrying that no one seems bothered with the Islamist threats.”

He cited in particular the nonchalant attitude adopted by NDP leader Thomas Mulcair and worries that a man who says the fight against Islamism is not Canada’s fight, could end up as Canada’s next prime minister.