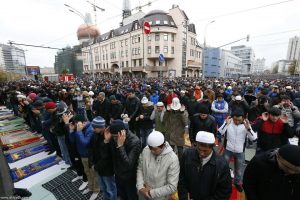 Russian authorities recently revealed that the suspected suicide bomber who attacked the metro in St. Petersburg was a Kyrgyz citizen born in Russia. This attack followed another that had targeted Reina nightclub in Istanbul on New Year’s Eve. That attack was executed by a Uighur from China who came to Turkey from Kyrgyzstan, like reported by aawsat.com .

These two attacks shed light on the complicated dynamic of recruiting extremists in Kyrgyzstan and other central Asian countries and Russia’s efforts to alleviate terrorist threats by facilitating the travel of local extremists to Syria.

Earlier this month, a Kyrgyz citizen, who was born in Russia, blew himself up in St. Petersburg’s metro station, killing 13 people. A few days later, Russian police dismantled a bomb found in an apartment in the same city.

The St. Petersburg attack was a reminder that terror threats are still a cause for concern for the Russian leadership and community, Russia expert Max Sokov told Asharq Al-Awsat. This was the first time terrorism hit the northern capital of Russia even though two dangerous attacks were thwarted in November of last year and February earlier this year.

According to a report published by The Diplomat Magazine, over 350 Kyrgyz citizens, including around 80 women, went to Syria. Another report prepared by Radio Liberty Europe said the vast majority of Kyrgyz citizens, who left to fight with ISIS in Syria, are from the southern parts of the country.

Over 2,000-4,000 people from Central Asia, including Kazakhs, Kyrgyz, Uzbek, Tajiks, Turkmen and Uighurs, have joined ISIS’s ranks. According to Sokov, the longest land border in the world is that separating Russia and Kazakhstan. Infiltrations across that border have increased, which has allowed different groups coming from “deep inside” Central Asia, such as Tajikistan and Uzbekistan, to move with relative freedom.

ISIS members hailing from central Asian countries have remarkably increased, especially in the past two years. Yet, it seems that ISIS does not consider Central Asia an important center for recruitment, like Europe and Tunisia.

For Central Asia’s residents, joining radical groups can be triggered by many factors, such as the failure of public institutions, level of education, poverty and wealth, the growing use of social media and the lack of opportunities for youth.

The Diplomat divided ISIS’s militants into different categories. The first includes citizens opposing their countries’ regime and politicians. They are not necessarily poor, but they dream of political and social changes in their countries. Driven by depression and disappointment, they decided to fight in Syria to feel that they are part of an important cause and to feel that they are heroes in an ideal battle for change. Some of them believe that they are fighting for freedom against an oppressive regime, while others think that the secular political regime has failed in providing them with a dignified life and that only an Islamic state can improve their future.

The second category is composed of people who have been oppressed or are escaping oppression. “Authorities in countries like Tajikistan and Uzbekistan are oppressive and do not allow the existence of an opposition. Some of this category’s members, particularly those who ran away from oppression, consider regions controlled by ISIS as a safe haven,” continued The Diplomat.

The third category includes those who are looking for a better life. They are often lured by false promises that include money and new job opportunities. ISIS has promised many of them high salaries that may reach $5,000 and $10,000, which are a fortune in this region. But, eventually, they discover that these promises are false.

Sokov said evidence in the St. Petersburg attack points to the involvement of al-Nusra Front and members from Central Asia. It turned out that the suspect came from the Osh region in Kyrgyzstan where people from the Uzbek ethnicity live. Sokov noted that Central Asian and Caucasus citizens who have joined terrorist groups in Syria and Iraq are a concern to Moscow and the Central Asian authorities.

The Diplomat mentioned that terrorist groups tend to recruit central Asian members living in Russia. Those migrants often work in low-paying jobs or suffer from unemployment, which isolates them.

Amid these circumstances, some fall under the influence of Chechens, who recruit extremists at mosques, and end up traveling to Syria through Moscow, Grozny or Turkey.

The fourth category of ISIS militants is composed of people who come from religious backgrounds or are very interested in Islam, said The Diplomat. Religious knowledge in Central Asian countries is generally low, which makes members practicing Islam an easy target for recruiters, who convince them that ISIS will unify all Muslims and save them.

The last category includes girls and young women, who believe false promises of love and marriage. They are often lured through social media.

According to an article published by Reuters in 2016, Russian authorities worked on easing the threat of extremists by providing direct or indirect help for would-be militants wanting to head to Syria. Moscow sought to eliminate the threat of local terrorist attacks and therefore, intelligence and police officials overlooked or even facilitated the departure of militants to Syria. According to Reuters, this plan persisted up until at least the 2014 Sochi Olympic Games and it was even heightened out of fear that the extremists would carry out attacks at the sports event.