You are here: Home / Africa / Islamists have returned to Mali – and the people are fleeing 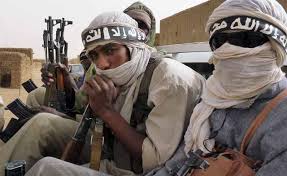 Usman Keita had vivid memories of the day in February two years ago when François Hollande came to Timbuktu.

French troops had driven out the jihadists and people threw off the shackles of the harsh sharia code which had been imposed, put on their most colourful clothes and belted out music to welcome the French President as the saviour of Mali.

We, the journalists, were caught up in the swirl of optimism that day as we walked around the wonderful city, glad to be part of the celebrations, glad that the Islamists had departed before they were able to carry out more killings and mutilations, destroy more historic sites and manuscripts.

“We felt so good, we felt so free, we were sure that everything was going to be fine. I wish I had met you and your colleagues that day, I would have invited you for dinner at my home,” said Usman. “I won’t be able to do that now, unfortunately.”

Our conversation took place two months ago at the central illegal migrant detention unit in the Libyan capital, Tripoli. The 23-year-old carpenter was among more than a thousand inmates, mainly from sub-Saharan Africa, who had been arrested on their journey which they hoped would end in Europe.

Usman had travelled to Libya with six fellow Malians. Four of the group were in the detention centre, but the men remained confident that their incarceration would be temporary and they would be able to make it to the port of Garibouli and get on a boat to Italy. “There will be others coming from Mali, the situation has got really bad. There is a lot of fighting, that is why people are leaving.”

France’s military intervention in Mali had been regarded as a success. The Islamists, including al-Qaeda in the Islamic Maghreb (Aqim), were stopped from advancing on the capital, Bamako, and cities they had captured taken back in a swift campaign. But the Islamists are now back and attacks taking place across the country including in Bamako. The violence has spread beyond borders, threatening to destabilise the region. This week representatives from Niger, Mauritania, Burkina Faso and Chad met in the Malian capital to set up a joint force to combat the insurgency.

More than 130,000 people have been driven from their homes in northern Mali by the renewed fighting; the total displaced in the five states discussing the military plan in Bamako is 1.6 million. The instability has produced a steady supply of human cargo from the Sahel region for traffickers.

Tinzouatine in the border between Mali and Algeria has become a busy conduit for the trade with Agadez in Niger, a key rendezvous point. The trek across the Sahara brings the risk of killings, rapes and forced labour. Usman described beatings by the smugglers and women being taken away by armed men in the Libyan city of Sabha.

The danger does not end with boarding the boat, the numbers of those who die crossing the Mediterranean is high among the Sahel refugees because they normally pay a lower fee to the traffickers than some other nationalities and get put in overcrowded boats.

The numbers continue to grow. As he was being hustled away by guards, Usman thrust a piece of paper into my hand with the telephone number of his family in Timbuktu; he had not been able to contact them for six weeks.

A Malian friend in Bamako tracked them down at my request. Usman’s two brothers, we learnt, have left home, embarking on the same route as him, with the same dream of reaching Europe.