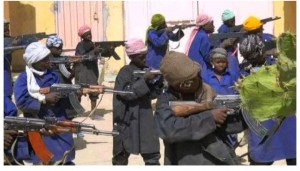 The governor of Borno State, Mr. Kashim Shettima, has attributed the rise in the number of children used as suicide bombers in the Northeastern part of the country on hard drugs given to them by the Boko Haram sect. Mr. Shettima made this known at a press conference he addressed on Friday. The governor also warned that the celebrated capture of the infamous Sambisa Forest does not indicate an end to the insurgency that has troubled the zone since 2009, like reported by saharareporters.com.

“In this criminal endeavor, they resort to the use of teenagers and children as young as seven years.

“More recently, they even strap babies on the back of their recruits in order to slip through our security dragnets.

“They also use hard drugs on these innocent children, who do not know what they are doing when they kill their own parents, relations, and fellow countrymen and women.  Many precious lives have been lost, hundreds of citizens, including school girls, were abducted. Many more people have suffered serious injuries as a result of these senseless acts of bloodthirsty enemies of peace,” said Mr. Shettima.

“It is regrettable that this upsurge in cowardly suicide attacks came not long after the patriotic military forces of this country recaptured Sambisa Forest, which used to be the operational zone of the Boko Haram terrorists.

“However, we must remind ourselves that the recapture of Sambisa Forest and the flushing out of the terrorists from most of their former enclaves does not mean that our struggle is over.

“Instead, the terrorists have resorted, in their usual cowardly fashion, to stepping up attacks on soft targets,” he observed.

Mr. Shettima expressed condolence to the families of all victims and acknowledged the support the state has received from local and international humanitarian bodies and development partners.

He assured indigenes and residents of Borno State that the government would continue to protect them, adding that they should not yield to the desire of the terrorists to make them live in fear.

“As we know, the intention of terrorists is to demoralize us, make us live in fear and prevent us from going about our normal lives and worshipping our God in ways that differ from their ungodly violence.

“We will not allow them to succeed in their wish to make us live in the permanent slavery of fear,” he stated.

The governor equally promised that his government would continue to support military and security agencies and volunteers in their effort to restore peace and security. Towards the restoration of peace, Mr. Shettima commended the people of the state, adding that there are still contributions required of them.

“We all have roles to play. I know that majority of you, the good people of Borno State, have remained sincerely committed to fighting this insurgency.

“I have met parents who exposed their insurgent biological children and handed them over to security forces to face justice.

“I know that insurgents and their allies often hide their identity so well that good citizens may innocently associate with them.

“But the bold patriotism of parents who turn in their children has always strengthened our resolve. Support for insurgents is a crime against humanity.

“I have met parents, who encouraged their children to join the Civilian JTF and risk their lives to fight insurgents.

“I have even met parents who remained contented and proud even after their sons died fighting under the Civilian JTF.

“I have seen elderly men and young girls organize themselves to join the fight as vigilantes and the Civilian JTF,” said Mr. Shettima.