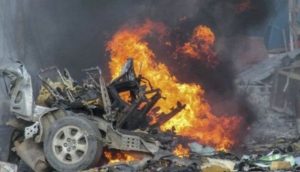 Many deads and several others wounded after a suicide car bomb blast at a police station in Somalia’s capital, police said Thursday.

The bomber was trying to drive into the police station’s gate but detonated against the wall instead, Capt. Mohamed Hussein told The Associated Press.

Ambulance sirens echoed across Mogadishu, with dozens of soldiers at the scene.

On Tuesday, at least 15 people were killed when a suicide car bomber posing as a milk delivery van detonated at a district headquarters in Mogadishu. Most of the victims were civilians. Al-Shabab claimed responsibility.

The extremist group has vowed to step up attacks after the recently elected government launched a new military offensive against it. The group also faces a new military push from the United States after President Donald Trump approved expanded operations, including airstrikes.

Al-Shabab last year became the deadliest Islamic extremist group in Africa, with more than 4,200 people killed in 2016, according to the Washington-based Africa Center for Strategic Studies.