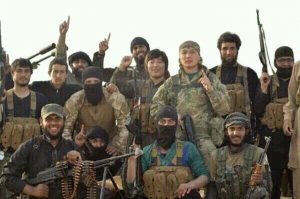 China’s ethnic Uighur minority were fighting and dying in Syria — including for Islamic State — though she claimed they had been duped into doing so.

Rebiya Kadeer, who heads the World Uyghur Congress (WUC), said that among the thousands of Uighurs who have fled to Southeast Asia, Turkey and elsewhere in recent years, a small number have ended up in the war-torn Middle Eastern country and have joined militant groups, like reported by japantimes.co.jp.

“Some Uighurs … died after Russian airplanes bombed them, they were killed in Syria,” she said at a news conference during a visit to Japan.

Russia’s militarily backs the regime of President Bashar Assad in Syria’s civil war, which erupted in 2011 and has left more than 300,000 people dead. Numerous groups, including IS, are fighting for control of the country.

The mostly Muslim Uighurs, who speak a Turkic language and number some 10 million, are native to the northwestern Chinese region of Xinjiang bordering Central Asia and have long complained of religious and cultural discrimination.

China has frequently warned that radical forces from outside have inspired terrorist attacks in Xinjiang as well as in other regions of the country and has launched a harsh crackdown.

It says among Uighurs who have fled are some seeking to train with extremists in Syria to eventually return and fight for independence in Xinjiang.

In 2015, China’s Security Ministry said more than 100 Uighurs that were repatriated by Thailand had been on their way to Turkey, Syria or Iraq “to join jihad.”

Once a wealthy and prominent businesswoman, Kadeer, now 70, fell out with the Chinese government and was jailed before her 2005 release into exile in the United States where she serves as president of the WUC.

She said Uighurs who end up in Syria are vulnerable and prone to being “brainwashed” into joining the fighting there, but still denounced them.

“We think they are just like criminal groups in our society,” she said.

The WUC describes itself as a “peaceful opposition movement against Chinese occupation of East Turkestan” — their name for Xinjiang.

It says it promotes “human rights, religious freedom, and democracy” for Uighurs and advocates “peaceful, nonviolent, and democratic means to determine their political future.”

But China has blamed the WUC, as well as the shadowy East Turkestan Islamic Movement (ETIM), of radicalizing Uighurs and fomenting violence and independence.

Overseas experts, however, have expressed skepticism, with some accusing China of exaggerating the Uighur threat to justify a tough security regime in resource-rich Xinjiang.

Human Rights groups argue that harsh police tactics and government campaigns against Muslim religious practices, such as the wearing of veils, have fueled Uighur violence.

China says it has boosted economic development in Xinjiang and upholds minority and religious rights for all of the country’s 56 ethnic groups.