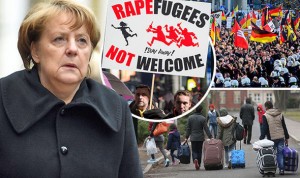 Islamist terrorism is the most severe challenge facing Germany, Angela Merkel has said in her New Year message like reported by independent.co.uk.

In her annual address, to be broadcast on Saturday, the German chancellor said 2016 has been “a year of severe tests” – the toughest being the “bitter and sickening” acts of terror committed by people claiming to seek refuge in the country.

It follows a year in which a number of attacks by refugees in Germany. Twelve people were killed and 20 injured when Tunisian national Anis Amri drove a truck into crowds at one of the Berlin’s Christmas markets two weeks ago, and several other fatal attacks by refugees occurred earlier in the year.

“It is particularly bitter and sickening when terror attacks are committed by people who claim to seek protection in our country,” Ms Merkel said.

But the Chancellor added that she was “confident for Germany”.

“As we go about our lives and our work, we are saying to the terrorists: ‘You are hate-filled murderers, but you do not determine how we live and want to live. We are free, considerate and open’,” she said.

“All this is reflected in our democracy, rule of law and values. They are the opposite of the hate-filled world of terrorism and will prove stronger than it. Together we are stronger. Our state is stronger.”

She emphasised, though, that her decision to allow refugees in was the right decision, stressing “how important and right it was for [the] country to help those who really need our protection find their feet here and integrate”.

“We are stronger together. Our state is stronger. Our state is doing everything to guarantee its citizens security in freedom,” she said, before pledging that in 2017 the government will take action quickly “where political or legal changes are necessary”.

On the subject of Europe, Ms Merkel called for “an open view of the world and self-confidence, in ourselves and our country” and attacked “distorted pictures” of the European Union and parliamentary democracy.

“We Germans should never be deceived into thinking that a happy future could ever lie in going it alone nationally,” she said.

Ms Merkel has faced criticism over the past year for allowing large numbers of migrants into Germany in 2015.

Critics have blamed her decision to open Germany’s borders during the height of the refugee crisis for the Berlin massacre, as well as two previous terror attacks carried out by asylum seekers pledging allegiance to Isis. The Chancellor’s own deputy recently branded a growing catalogue of German security blunders “shocking”.

Ms Merkel is seeking a fourth term as chancellor in an election expected in September, and has already said she expects her toughest campaign yet.

The 62-year-old has been the head of the German government since 2005, and has seen high popularity during her premiership, with many Germans affectionately referring to her as “Mutti” or mother.

But she has struggled to fight the rising tide of anti-immigration feeling since she allowed over a million refugees fleeing conflict in the Middle East to settle in the country.

A poll for German newspaper Bild am Sonntag found 55 per cent of Germans supported Ms Merkel running for a fourth term but her party faces a threat from the rising appeal of the anti-immigration party Alternative for Germany (AfD).

During regional elections in the northern state of Mecklenburg-West Pomerania in September, the CDU were pushed into an embarrassing third place when the AfD surged ahead of them.