The scars of extremist violence run deep in today’s France, and the threat of new attacks hangs heavy over the upcoming presidential election, like reported by breitbart.com 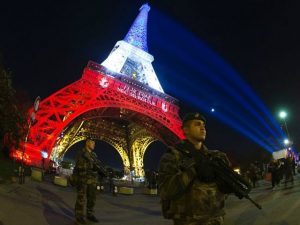 Voters will cast ballots under a state of emergency that is increasingly stitched into the fabric of French life.

Yet terrorism is not the No. 1 campaign issue for France’s two-round presidential election on April 23 and May 7; jobs are.

Georges Salines wants to make sure the next president doesn’t forget how extremist attacks have damaged France. His daughter Lola was killed when Islamic State fighters stormed Paris’ Bataclan theater in November 2015, the deadliest of several attacks to hammer this country since French voters last chose a leader in 2012.

“Mr. or Madame President, this question of terrorism is very important, very difficult and we request a comprehensive approach,” he says. “You have to act all the time, from the time when the person is in danger of becoming a terrorist to the aftermath of an attack … you have to act at the international level, the national level, at the local level of the families and even individuals.”

Lola, a 28-year-old who edited children’s books, played the ukulele and adored roller derby, went to the Bataclan for a concert on Nov. 13, 2015, and never came home. In the chaos of the attack’s ensuing hours, her father and brother launched a desperate search for her on social media. Today, she rests in Paris’ Pere-Lachaise cemetery.

Extremist attacks on France have claimed more than 230 other lives since 2015. They include cartoonists at the satirical newspaper Charlie Hebdo, shoppers at a kosher market, children watching holiday fireworks on the French Riviera, an elderly priest celebrating Mass in Normandy, young people dancing to music.

“These are tragedies of enormous importance. And behind one victim, there are many, many other indirect casualties, because we all grieve and suffer the loss of our loved ones,” Dr. Salines told The Associated Press in his medical office. He now heads an association, called November 13-Fraternity and Truth, that has sent a letter to France’s 11 presidential candidates asking them to lay out their counterterrorism plans.

Those candidates will all compete in the April 23 first-round vote, with the top two vote-getters moving on to the presidential runoff on May 7.

Already two attackers have tried to target Paris sites during this presidential campaign – one at the Louvre Museum, the other at Orly Airport. Other, more deadly attacks have hit countries around Europe in recent months.

Across the political spectrum, the French candidates are pledging more military spending and more robust intelligence – promises that resonate with an electorate that has gradually shifted to the right on security issues.

Right wing leader Marine Le Pen has been the most outspoken, blaming a surge in immigration and lax attitudes toward Islamic fundamentalism for France’s recent attacks.

She vowed in a speech Monday to crack down on criminals who risk turning to jihad and to rid France’s Muslim population of fundamentalists who intimidate peaceful believers. She would add 50,000 soldiers to France’s 200,000-strong military and buy more jets, ships and armored vehicles.

Independent centrist Emmanuel Macron – whom polls consider the front-runner in the unpredictable race – wants an international initiative to press U.S. social media giants to halt the spread of “Islamist propaganda” and to force internet firms to provide data encryption keys to police when needed in a counterterrorism investigation.

Facebook on Thursday said it has targeted 30,000 fake accounts linked to France ahead of the country’s presidential election, as part of a worldwide effort against misinformation. It said it has “taken action” against the French accounts, removing sites with the highest traffic.

Le Pen, Macron and conservative presidential candidate Francois Fillon all want to boost France’s defense spending – and some candidates are talking about reviving the military draft. France’s military is on the front line of the fight against Islamic extremism, with operations in Syria, Iraq and Africa’s Sahel region, as well as on its own territory.

“Unlike in the U.S., the idea of having a strong leader, a protector of the country, is not among the traits that is most desired for the president of the country. We want him first of all to be honest, and then we want him to be competent, and then to have the stature of a president,” Micheau said.

Fighting extremism will be a top challenge for France’s next president, and a complex one, partly because the problem is homegrown.

There are more jihadis from France in the Islamic State group than from any other Western country, including many young French-born men with family origins in France’s former colonies in North Africa. Facing dim job prospects and discrimination in poor French suburbs, they are easily wooed by charismatic recruiters online.

But violence in France and elsewhere in recent years has shown that there’s no single profile of a potential attacker. Some jihadis worked in groups, others worked alone. Their motivations and methods are so varied that authorities admit they can’t protect everything all the time.

Cracking down too hard is also controversial. France has been under a state of emergency since 2015, and rights groups fear that some individual freedoms may be permanently lost. Hundreds of people are under house arrest.

Salines says France can only vanquish terrorism if it tackles the problem from all angles.

“It’s a terrible symbol of the disease of our world,” Salines said. “When you address terrorism in a comprehensive manner, you address a lot of comprehensive questions about geopolitical disorder, the inequality in society, the difficulty people have in talking to each other.”