You are here: Home / Africa / Islamist sent to ICC war crimes court for attacks on treasures of Timbuktu 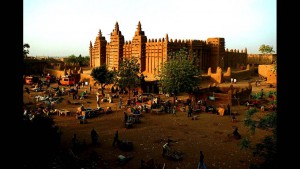 An alleged al-Qaeda-linked Islamist leader was handed over to the International Criminal Court Saturday to face charges of ordering the destruction of monuments in Mali’s fabled city of Timbuktu, in the first such case before the tribunal.

Ahmad Al Faqi Al Mahdi was detained under an arrest warrant issued by the ICC last week and handed over by the authorities in Niger, the court said in a statement. The details of his arrest were not immediately clear.

He is suspected “of war crimes allegedly committed in Timbuktu, Mali, between about 30 June 2012 and 10 July 2012, through intentionally directing attacks against buildings dedicated to religion and/or historical monuments,” the statement said.

ICC spokesman Fadi El Abdallah told AFP that Faqi arrived at the court’s detention unit in The Hague at 3.20 am (0120 GMT), in what is the first such case to be brought by the court for the destruction of religious buildings and historical monuments.

It is also the first case to be brought by the ICC, the world’s only permanent war crimes court for the unrest that has wracked the west African nation.

Faqi “is expected to make a first appearance in the next few days, but an exact date has not been set,” Abdallah said.

Called the “City of 333 Saints”, Timbuktu around 1,000 kilometres (600 miles) northeast of Mali’s capital Bamako, was attacked for months by jihadists.

In June 2012, Al-Qaeda-linked militants destroyed 16 of the northern city’s mausoleums, dating back to its golden age as an economic, intellectual and spiritual centre in the 15th and 16th centuries.

“Destroying a mausoleum is like murdering someone, their history and their past,” he said. “Like all people from Timbuktu I’m happy (about the arrest). I will closely follow the trial.”

Faqi was a leader of Ansar Dine, a mainly Tuareg group linked to Al-Qaeda in the Islamic Maghreb (AQIM) and one of the groups that briefly took control of Mali’s vast arid north in 2012.

Born in Agoune, 100 kilometres (60 miles) west of Timbuktu, Faqi “was an active personality in the context of the occupation of Timbuktu,” the ICC said in a statement.

In his role as part of the Islamic Court of Timbuktu, Faqi is alleged to have jointly ordered or carried out the destruction of nine of the mausoleums as well as the Sidi Yahia mosque.

The ICC said there were reasonable grounds to suspect that Faqi was “criminally responsible for having committed, individually and jointly with others, facilitated or otherwise contributed to the commission of war crimes” linked to the destruction of the buildings.

ICC chief prosecutor Fatou Bensouda called Faqi’s arrest an “important step forward in the fight against impunity, not only in Mali but also the broader Sahel and Sahara region in Africa, whose populations have been in recent years subjected to unspeakable crimes.”

Bensouda had opened an investigation into the situation in Mali in January 2013, after it was reported to the tribunal by the government of Mali the previous year.

In 2014 the UN cultural body, UNESCO, began rebuilding Timbuktu with the Malian government and other international organisations after a 2013 French-led military operation drove the jihadists out of the city.

The mausoleums were constructed to pay homage to deceased saints who were regarded as pious, great humanists and scholars of their time — but the buildings were considered blasphemous by the jihadists.

However, 370,000 of the priceless parchments were smuggled to Bamako in 2012 to protect them from the jihadists, and archivists in Mali’s capital are now painstakingly classifying and digitising them.