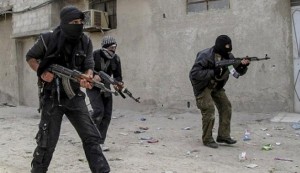 Jabhat al-Nusra, or the Al Nusra Front, is an Al Qaeda affiliated Sunni Islamist group, now re-emerging as one of the dominant rebel factions fighting to overthrow the regime of Syria’s president Bashar al-Assad.

Al Nusra’s stated aim is the establishment of a Sunni Islamist Emirate across the Levant region, to be ruled under an extreme interpretation of sharia law.

The Al Nusra Front is formally listed as a terrorist organisation by several countries including Australia and the United States. The United Nations has also proscribed the movement.

Al Nusra has cut a bloody swathe through Syria, launching suicide attacks, kidnappings and executions, although the Australian Government said at various times the group has “attempted to play down its extremist ideology and conceal its links to AQI (Al Qaeda in Iraq) to avoid alienating the Syrian population”.

According to a publicly released Australian intelligence assessment “current membership is difficult to ascertain, with one estimate placing it between 6,000 and 10,000 members”.

In March 2015, one of the group’s leaders, ‘Abu Sulayamn Muhajir’, identified by the Australian newspaper as Mostafa Mohamed Farag, a 31-year-old Egyptian-Australian preacher from Sydney, told the Al Jazeera TV network that his movement would wage an endless conflict against the West.

“The choice is simple: leave our lands, stop interfering in our affairs – or face a perpetual war.”

He also branded the Islamic State (IS) as a “criminal group that has gone astray from Islamic law”.

Al Nusra and IS are deadly rivals.

The leaders of both groups emerged from the decade-long insurgency in Iraq, where they initially fought under the Al Qaeda banner.

As the uprising against Syria’s president escalated into civil war in 2011, the Iraqi insurgent leadership sent fighters under the command of Abu Mohamad al-Golani, across the border to establish another Al Qaeda affiliate – Jabhat al-Nusra.

As the popularity and influence of the Syria-based Al Nusra swiftly grew under al-Golani, he ignored orders to merge back under the control of the main Iraqi group led by Abu Bakr al-Baghdadi, whose faction had morphed into the Islamic State in Iraq.

In early 2013 the two sides clashed violently over money, territory and political control.

Al Qaeda leader Ayman al-Zawahri sided with the Syrian faction, casting the Islamic State and al-Bagdhadi out of the Al Qaeda fold.

Following the schism, the two sides displayed a brutal competiveness in their bloody struggle for control of Syria, not only fighting Mr Assad’s government forces, but crushing other, smaller, Western-backed insurgent groups.

While international attention has focussed on the spectacular gains of IS in eastern Syria and Iraq –Al Nusra has quietly consolidated its hold on parts of northwest Syria.

In contrast to IS, most of Al Nusra’s members are Syrian, although the movement has attracted smaller numbers of Australians and other foreigners to its ranks.

Spokesman Mostafa Mohamed Farag is the most highly ranked Australian, but another prominent recruit was Mohammed Ali Baryalei, a charismatic Afghan-Australian from Sydney who travelled to Syria where he joined Al Nusra in about April 2013.

The ABC’s 7.30 program reported that within two months he switched allegiance to Islamic State, as IS grew in stature to become the dominant extremist group.

Australian counter-terrorism authorities told 7.30 that Baryalei gained a trusted position in IS operational command and became the key intermediary for scores of Australians travelling to the battlefields of Syria and Iraq.

Senior police claimed he was also forming a cell of young Sydney-based Afghan-Australians to carry out local terrorist attacks.

In October 2014, the 33-year-old was reportedly killed in fighting.

In March 2015, Al Nusra suffered a major setback when the group’s veteran military commander Abu Human al-Shami was reportedly killed in a US air strike.

Despite al-Shami’s death and the targeted killing of many other key commanders, Al Nusra has since achieved a remarkable string of military victories in Syria’s northwest, capturing the city of Idlib, overrunning a strategically significant military base, and seizing large quantities of weapons from rival militant groups.

After two years of being overshadowed by IS, the group enjoys a resurgence in popularity, with fighters once more returning to join its ranks.

Politically, Al Nusra has attempted rebrand itself as a less extremist alternative to Islamic State.

The gulf state of Qatar has reportedly tempted the leadership to formally break ranks with Al Qaeda, in return for more weapons and cash and leadership of a more ‘moderate’ Gulf-led anti-Assad coalition.