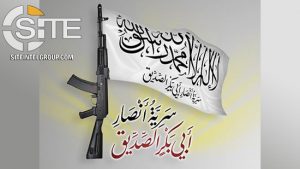 A small Islamist militant group has claimed responsibility for an attack on Turkish forces in the northwestern Syrian province of Idlib, like reported by voanews.com.

The Ansar Abu Bakr al-Siddiq Squadron said it was behind the attack Saturday that targeted a Turkish military outpost in the northern countryside of Idlib.

“The sniper platoon of the Abu Bakr al-Siddiq Squadron targeted one of the main bases of the ‘Turkish NATO’ military stationed near the town of Batbo, north of Idlib,” the extremist group said Sunday in a statement published on social media.

Three Turkish soldiers were wounded as a result of the assault, according to local news media. The Turkish government has not commented.

Idlib is the last major stronghold controlled by forces opposed to the government of Syrian President Bashar al-Assad.

Hayat Tahrir al-Sham (HTS) is the most powerful Islamist group present in Idlib, but other al-Qaida-affiliated groups and Turkish-backed rebels also have a significant presence in the Syrian enclave.

The HTS, formerly known as al-Nusra Front, is considered a terrorist organization by the United States.

As part of a de-escalation agreement with Russia, Turkey has deployed forces in Idlib and set up several observation posts throughout the rebel-held parts of the province.

Russia has been a staunch supporter of the Assad government, while Turkey backs several rebel groups.

Since its founding in August 2020, Ansar Abu Bakr al-Siddiq has claimed responsibility for at least three other attacks on Turkish forces in Idlib.

Experts say the extremist group represents a trend among jihadis in northwest Syria that openly oppose the HTS and Turkey.

“They actually believe that you have to actively fight against the Turkish presence in northwest Syria because they think it’s an apostate occupation of Muslim lands,” said Aymenn Jawad al-Tamimi, a Syria researcher at Swansea University in Britain.

Although the group has no allegiance to al-Qaida or the Islamic State terror groups, its leaders promote the establishment of a strict Islamist state in Syria.

It is not clear how many fighters are in Ansar Abu Bakr al-Siddiq, but experts believe most of its members have defected from the HTS and other al-Qaida-affiliated groups.

Several other Islamist factions also have emerged in recent months in Idlib in opposition to a new cease-fire deal reached between Turkey and Russia in March 2020. Their attacks have primarily targeted Russian-Turkish joint patrols on the strategic M4 highway.