You are here: Home / Africa / Islamist group Boko Haram is world leader in fatalities — US report 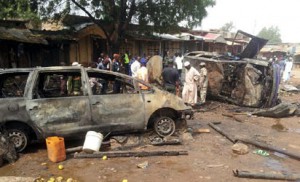 Boko Haram ranks first among the world’s terror groups in terms of the number of fatalities in 2014, according to the US Department of State annual terrorism report for last year.

“Although ISIS was responsible for the greatest amount  of attacks last year, it was a close second to Boko Haram in number of fatalities”, the report said.

The report also singled out the Islamist group, led by Abubakar Shekau, as sharing ISIS penchant for the use of brutal tactics”.

The group was also behind sustained attacks in the three North-East states of Borno, Yobe and Adamawa.

Meanwhile, the US Department of State report said ISIS was beating al Qaeda at being the world’s leading terrorist group.

The “unprecedented” spread and brutality of ISIS, its strength in recruiting foreign fighters, messaging and its ability inspire lone wolf attacks have helped the group supplant al Qaeda as the leading global terrorist group, said the report. The report said both were adapting their tactics in ways which are more brutal and harder to trace.

“The prominence of the threat one posed by core al Qaeda diminished in 2014,” the report found. In addition to significant losses of its core leadership in Afghanistan and Pakistan, it noted that “AQ leadership also appeared to lose momentum as the self-styled leader of a global movement in the face of ISIL’s rapid expansion and proclamation of a Caliphate.”

The number of terrorist attacks in 2014 increased 35% over the previous year, but were more heavily concentrated in a handful of countries. More than 60% of all attacks took place in five countries — Iraq, Pakistan, Afghanistan, India and Nigeria — according to the National Consortium for the Study of Terrorism and Responses to Terrorism at the University of Maryland, which compiles statistics on worldwide terrorism.

The U.S. is “deeply concerned” about the growth of ISIS beyond Syria and Iraq and the birth of self-proclaimed affiliates, the report found, particularly in Libya, Egypt and Nigeria. It acknowledged questions remain about the meaning of such affiliates – whether they represent a command relationship or the groups simply share “merely opportunistic relationships” with ISIS.

Although al-Qaida’s leadership has been weakened, the report said the group “continued to serve as a focal point of inspiration” for its worldwide network of affiliates, such as AQAP in Yemen, al-Nusra Front in Syria and al-Shabaab in Somalia.

Even as it negotiates with the U.S. and other world powers on a nuclear deal, the report found Iran’s sponsorship of terrorism worldwide last year remained “undiminished.”

“These attacks may presage a new era in which centralized leadership of a terrorist organization matters less, group identity is more fluid and violent extremist narratives focus on a wider range of alleged grievances and enemies with which lone actors may identify and seek to carry out self-directed attacks,” the report found.

The U.S. has been working to “shift” it’s counterterrorism strategy to more effectively partner with countries where terrorist networks have a foothold, the report said. The US has assembled a sixty-plus nation global coalition to stop ISIS advances on the ground, counter its messaging and stem the flow of foreign fighters and financing.

The U.S. is also working with allies in North Africa and the Middle East to strengthen their counter-terrorism capabilities and help them develop new laws to address the foreign fighter issue.