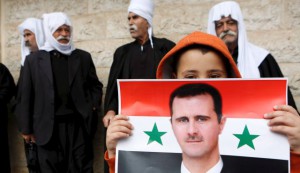 Rebels surrounded a government-held Druze village on the Syrian side of the cease-fire line on the Golan Heights Wednesday after heavy fighting, activists said.

The advance came a day after Israel, which has a significant Druze population, said it was preparing for the possibility that refugees fleeing fighting in the area might seek to cross to the Israeli-occupied side of the strategic plateau.

After fierce clashes with pro-government forces, rebels, including Islamist fighters, surrounded the village of Hader Wednesday, the Syrian Observatory for Human Rights said.

He said the rebels had received reinforcements from elsewhere in Qunaitra province, which covers much of the Golan.

“The regime has not sent reinforcements yet, but the Druze villagers are standing with the government,” Abdel Rahman said.

The encirclement of Hader comes amid rising fears in Syria’s Druze community.

Last week, 20 Druze villagers were killed in an altercation with members of Al-Qaeda’s Syrian affiliate Al-Nusra Front in Idlib province in the northwest.

Shortly after the deaths, rebel forces in southern Syria briefly overran a government air base in majority-Druze Swaida province, in their first such advance in the government-controlled region.

While the rebels were eventually expelled from the air base, fighting has continued nearby.

The Druze are followers of a secretive offshoot of Shiite Islam, and made up around three percent of Syria’s pre-war population of 23 million.

The community has been somewhat divided during the war, with some members fighting on the government side and others expressing sympathy for the opposition.

Mostly, the Druze have taken up arms only in defense of their own areas.

In Swaida, Druze have formed a local militia to protect themselves from the rebels, residents say.

A spokesman confirmed he was referring to a potential influx from areas adjacent to the cease-fire line on the Golan.

His comments did not directly mention the Druze, but came after leading members of the minority in Israel called on the government to help their brethren in Syria following the recent violence.

Officials say there are 110,000 Druze in northern Israel, and another 20,000 in the Israeli-occupied Golan.

Israel seized 1,200 square kilometers (460 square miles) of the plateau in the Six-Day War of 1967 and later annexed it in a move never recognized by the international community.