You are here: Home / MidEastGulf / Islamist fighters in final battle in Syria 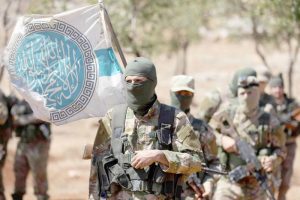 Intermingled among 3 million civilians under siege in the Syrian government’s assault on the last opposition stronghold are tens of thousands of al-Qaida-linked fighters and other militants who came from around the world to take part in the country’s civil war, like reported by dailymail.co.uk.

These hardened fighters have nowhere left to go as the war reaches an endgame in Syria’s northwest province of Idlib on the Turkish border. Like the civilians they terrorized for years, they are trapped in an ever-shrinking territory under constant bombardment by the Russian-backed offensive by the government of President Bashar Assad.

The militants are a mix of home-grown fighters and the foreign jihadis who began converging to Syria after the 2011 uprising against Assad turned into an armed insurgency. The influx made Syria one of the main centers for militants worldwide, described by a top U.S. envoy as the largest al-Qaida haven since Osama bin Laden’s days in Afghanistan.

Idlib is believed to have more than 50,000 fighters, including the hard-core militants as well as tens of thousands of Turkish-backed Syrian rebels, most of them with Islamic fundamentalist ideologies. In the past few years, the Syrian government struck safe passage deals with rebels as it took back control of areas around the country. As a result, rebels from elsewhere flowed into Idlib, their last stronghold. The current Russian-backed government offensive now aims to capture Idlib and crush the rebellion for good.

Here’s a look at the militants and their options:

The powerful HTS has militarily crushed many of its rivals within the opposition, carried out a crackdown against the civilian population and set up its own so-called “salvation government” in 2017 to run day-to-day affairs in the region.

HTS evolved from the Nusra Front, the al-Qaida affiliate in Syria, which rebranded itself and changed names on several occasions, claiming it had cut its links with al-Qaida.

In February 2018, as HTS became more Syrian, most of its foreign members set up their own group known as Horas al-Din, Arabic for “Guardians of Religion.” That group is now largely seen as the main al-Qaida branch in Syria and takes a hardline stance, rejecting a political solution for the war.

Most of its fighters are deployed in the rugged mountains of Idlib where they could take shelter amid the offensive.

Idlib is also home to the Turkistan Islamic Party, largely made up of thousands of Chinese jihadis. Most are from the Turkic-speaking, Muslim Uighur community native to Xinjiang in China. Their main presence is in and near the strategic town of Jisr al-Shughour on the edge of Latakia, an Assad stronghold.

Overall, as many as 8,000 foreign militants have been estimated to be in Idlib.

The National Front for Liberation is a Turkish-backed Syrian rebel coalition, formed in 2018, which has played a major role in fighting government forces in Idlib. The group, made up of 16 factions, includes Islamic fundamentalist fighters believed to be more moderate than those of al-Qaida-linked groups. One of the strongest factions is Failaq al-Sham, funded and armed by Turkey. They later became part of the Turkey-backed coalition known as the Free Syrian Army.

As the noose tightens around Idlib, most of the militants have no choice but to fight till the end and die. Some will try to blend in with the civilian population – although foreign fighters will have difficulty doing that.

Opposition activists in the region say local Syrian fighters have already begun separating themselves from the foreigners. A number of foreign jihadis have split away from locals and moved into mountainous areas, said Akram al-Ahmad, a Syrian opposition activist who spends much of his time in Idlib.

Al-Golani, the HTS commander, gave a rare interview in late January to the Brussels-based International Crisis Group in which he presented HTS as a local Syrian group independent of al-Qaida’s chain of command “with a strictly Syrian, not a transnational, Islamist agenda.”

“Abu Mohammed al-Golani is a pragmatic person who comes from a generation of al-Qaida that tried to shift into local politics, contrary to al-Qaida ideology that tends to be international and has no borders,” said Wael Olwan, a former spokesman for a Syrian rebel group who now works as a researcher at the Turkish-based think tank Jusoor for Studies.

DISPERSE IN THE WORLD

As the Syrian government offensive pushes civilians toward the border with Turkey, analysts say that some foreign militants might try to cross the border into Turkey and from there move on to other parts of the world to carry out attacks for al-Qaida.

Sam Heller, a senior analyst with the International Crisis Group, said that if the government offensive moves all the way to the Turkish border, chaotic scenes might unfold as large numbers of civilians try to escape. Militants that could exploit such chaos to slip away.

“A military offensive on Idlib risks driving these militants into Turkey, and then dispersing them globally, including to Europe and the post-Soviet space,” Heller said.

“At that point, some of these more experienced foreign cadres could link up with militants elsewhere and serve as an accelerant for local jihadist violence,” he said.