You are here: Home / Europe / Islamist extremists arrested in Bosnia 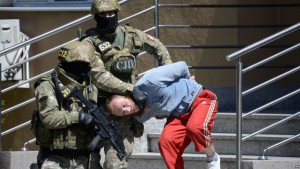 Police in Bosnia have detained 11 people suspected of links with the Islamic State group and its militants fighting in Syria and Iraq.

Police said Tuesday the operation, launched on the orders of the state prosecutor’s office, was continuing in 13 locations in the wider area of Sarajevo.

The prosecutor’s office said in a statement the operation is targeting 15 suspects who have been investigated for “incitement of and recruitment for terrorist attacks” and are believed to be in “close contact” with the Islamic State group militants, including persons fighting in Syria and Iraq.

During the search of locations used by suspects, including two places of worship and several private homes, police found and seized evidence confirming such links, the statement added.