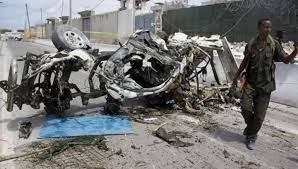 A police officer says a suicide car bomber has detonated at a district headquarters in Somalia’s capital, killing at least seven people, like reported by ap.org.

Capt. Mohamed Hussein says the bomber posing as a milk delivery van sneaked into the Wadajir district headquarters in Mogadishu.

Hussein says most of the dead are civilians.

The al-Qaida-linked al-Shabab extremist group has claimed responsibility for the attack via its Shahada News Agency, according to the SITE Intelligence Group.

The blast comes less than a week after al-Shabab gunmen carried out an overnight siege on a popular restaurant in the Somali capital, killing at least 31 people.