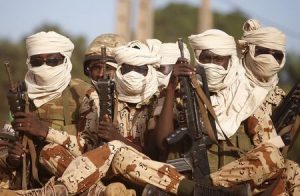 Boko Haram fighters killed six Chadian soldiers in the Lake Chad region, where deadly jihadist attacks against civilians and security forces are on the rise, the army said Tuesday according to thedefensepost.com.

Security experts say Boko Haram, which originated in Nigeria in 2009, has established bases on islets dotting Lake Chad, a vast swampy expanse in the border region straddled by Nigeria, Chad, Niger, and Cameroon.

The soldiers were killed while patrolling a group of islets on the Chad-Nigeria border, army spokesman General Azem Bermendoa Agouna told AFP.

Twelve other soldiers were wounded and the military killed around 10 “terrorists,” he said.

The Chadian army launched an offensive against Boko Haram in April after some 100 soldiers died in an attack by the group on one of its bases.

President Idriss Deby then claimed to have pushed the jihadists out. But attacks have continued despite the military operation.

Fighters from a dissident branch, the Islamic State West Africa Province (ISWAP) group, are also extending their grip and influence around Lake Chad.

At least 36,000 people have been killed and around three million displaced in the decade-long Islamist conflict which spread from northeast Nigeria to Chad, Niger, and Cameroon.

Those countries have formed a regional military coalition to fight the jihadists.