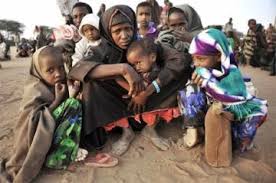 According to Lowcock, who coordinates UN’s Humanitarian Affairs and Emergency Relief, this year alone, another 140,000 persons had been displaced by the resurgence of Boko Haram attacks in Borno State.

Lowcock, who was in Nigeria last week on an official visit that took him to Maiduguri, the base of Boko Haram insurgency, from where he carried out an assessment of the situation in the Northeast, issued a statement through the United Nations Office for the Coordination of Humanitarian Affairs (UN-OCHA)

In the statement, Lowcock appreciated the efforts made by Nigeria and other bodies between 2016 and 2018 to regain control of areas previously ravaged by the insurgents, which assisted more than two million displaced people to return to their homes.
“But renewed violence, most of it perpetrated by Boko Haram insurgents, has sparked an upsurge in forced displacement in Borno, with more than 140,000 people forced to move this year alone,” he said.

He said many farmers had missed multiple planting seasons and more than three million people were food insecure.
Lowcock said he had over the past year watched with growing concern, the deteriorating humanitarian situation in Borno.
He said a ten-year conflict and violence committed by Boko Haram and other non-state armed groups had destroyed communities in Borno.

“In my visits to Borno on September 2017 and October 2018, I met many of the ordinary people, who have been the victims of this crisis.”

The UN official acknowledged that though “military and security measures against the insurgents were a crucial and valid part of the response led by the Nigerian authorities, such action needs to be proportionate and avert amplifying the hardship of civilians, huge numbers of whom have suffered terribly as a result of the actions of the terrorists and insurgents.”
He, therefore, noted that military action alone would not solve the problem.

“It is therefore extremely important that the Nigerian Government, including through institutions like the Northeast Development Commission, is also implementing wider measures to address the root causes of the crisis, relieve humanitarian suffering, and promote stabilisation, recovery, and development. I strongly support these measures.”

He said he had reviewed the situation with senior officials in the Nigerian government, as well as the military and other authorities in Borno and NGOs.

“With everyone I have met, I have agreed that NGOs – through their rich networks and capacity to reach people, and their expertise and experience in operating at the community level – have a very important role to play,” he added.

Lowcock called on humanitarian organisations working in Nigeria with funding from the international community to operate in full compliance with international standards, including counter-terrorism related conditions, national laws, and humanitarian principles.

He added that maintaining such standards was not only perfunctory but practical prerequisite for funding from the major donors.

“And it is important to recognise that all the international NGOs working in the North-east are authorised to do so through the government registration process and local approvals from the relevant authorities,” he added.