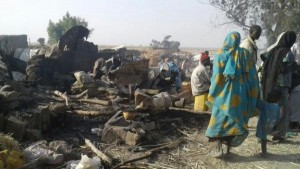 Nigerian soldiers repelled a Boko Haram attack on a refugee camp, days after the camp was accidentally bombed, witnesses said to upi.com..

The Rann IDP camp in northeastern Borno state was attacked by over 100 Boko Haram insurgents on Thursday. The hours-long fight resulted in eight Boko Haram deaths and one injury to a Nigerian soldier guarding the camp, a source in the camp told the Nigerian newspaper Premium Times.

The attack came after the camp was inadvertently bombed by the Nigerian air force, resulting in at least 52 deaths and 120 injuries. Maj. Gen. Lucky Irabor, theater commander of Nigeria’s counterinsurgency operations, said the jet that bombed the camp was seeking Boko Haram forces gathering nearby. It remains unclear if those involved in the attack on the camp Thursday were the intended targets of the aerial bombing.