Militants from Boko Haram have long carried out suicide bombings in Nigeria, Chad and Cameroon, like reported by jerseyeveningpost.com 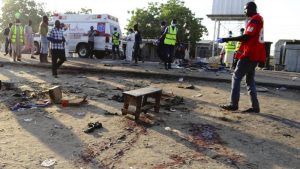 In a second simultaneous attack, two female suicide bombers died and more than a dozen others were wounded, he said.

While there was no immediate claim of responsibility, suspicion fell on the extremist group Boko Haram.

Militants from the group have long carried out suicide bombings not only in northeastern Nigeria, and also in neighbouring Niger, Chad and Cameroon.