You are here: Home / Africa / Islamist al-Shabab attack US military base in Somalia 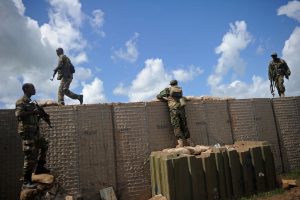 A Somali official says a suicide car bomber detonated a vehicle packed with explosives at the gate of a military airstrip which is a base for U.S. and Somali forces, like reported by heraldonline.com.

Yusuf Abdourahman, a security official with the Lower Shabelle regional administration, told The Associated Press that a burst of gunfire could be heard across the base after bombing, suggesting an ongoing attack on the base.

Somalia’s Islamic extremist rebels, al-Shabab, have claimed the responsibility for the attack.

The U.S. military uses Belidogle airstrip in the Lower Shabelle region as a base where it launches drones that attack al-Shabab and trains Somali troops.